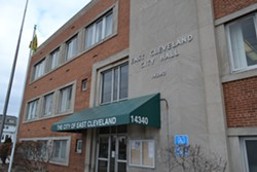 DOUG BROWN / SCENE
With news that State Auditor David Yost isn't so sure East Cleveland could handle a loan right now, city leaders are scrambling to the next plan for their collective economic woes. Finance Director Jack Johnson has already floated the idea of filing for bankruptcy, which City Council President Barbara Thomas told the East Cleveland Narrator she'd "be willing" to go through.

We gave Thomas a call, but the phone number provided by her office is "temporarily not in service." Ditto for the mayor's assistant's phone line.

Meantime, Thomas and Mayor Gary Norton will address the issue at a public meeting tomorrow evening. The meeting is set for 5:30 p.m. 5 p.m. Dec. 3 at the East Cleveland Public Library, 14101 Euclid Ave.

The topic at hand — a city's finances and future — is a complex one. Residents routinely line up at City Council meetings to probe the matter, but any notions that a plan to address budget deficits, outstanding bills, health insurance, etc., are typically danced around or bypassed entirely.

Earlier this year, when Scene looked around and realized we were the only Cleveland news media outfit hanging around Norton's State of the City address, we wrote: Norton’s basic assertion that the ship was now righted, that bright new leaders were in place, that a merger would not be necessary, and that great economic advances were coming for his city in 2014, rang not only false but out-of-touch.

Clock's ticking on 2014, and the state is still demanding a financial plan.