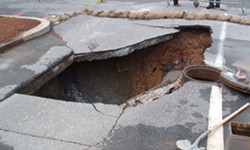 Wikimedia Commons
A city van recently fell into a sinkhole similar to this.
They can appear in mere minutes. And yesterday, one Cleveland water department van was indeed swallowed by a sinkhole that showed up in a flash of water and pavement.

After a resident at East 127th Street near Cornado Avenue called the department regarding a water leak, an investigator was dispatched to check out the problem around 2 p.m. Thirty minutes later, said Cleveland Division of Water in a news release, the road opened up to the heavens and swallowed the parked, white van.

Cleveland police speculated that the hole may have appeared thanks to a water main break. Thankfully, no one was in the van when it took a nose dive into the abyss.

Crews worked for hours to fish out the vehicle last night, and the road is now closed for repairs.