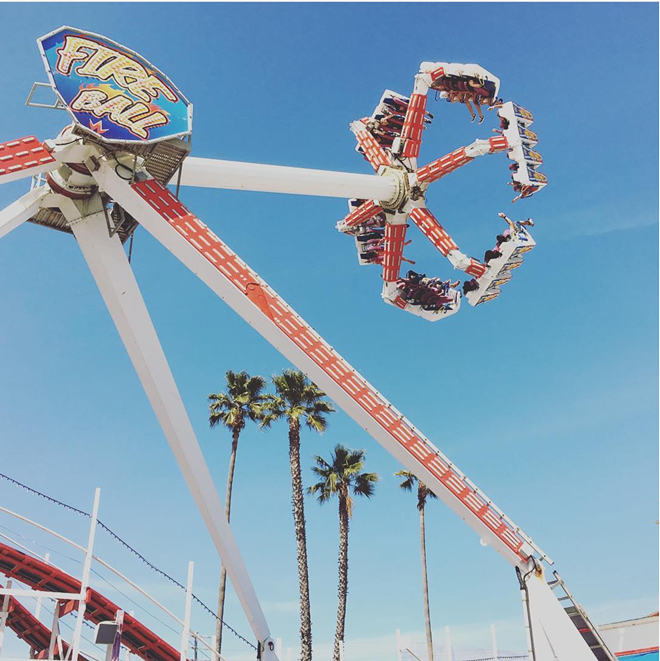 Photo via justinjbuchanan/Instagram
An example of the carnival ride that malfunctioned at the Ohio State Fair.
Update: State officials announced yesterday that a settlement agreement has been reached with those injured in last summer's harrowing Ohio State Fair's ride malfunction.

We don't know much about the agreement except that none of the money used will come out of the state treasury and the victims have agreed to release the state fully.

The state Court of Claims must next approve the settlement for the whole lawsuit to be over.

Read up on the trajectory of the deadly Fire Ball ride event and subsequent investigations below.

After interviewing more than 80 witnesses and thoroughly inspecting the offending ride, investigators say there isn't enough evidence to proceed with the case.

For now, the Fire Ball ride remains in secure storage.

***
(Update post 8/7/2017): Those tasked with investigating the Ohio State Fair incident have deemed "excessive corrosion" as the cause of the ride's malfunctioning.

The manufacturers of the Fire Ball, Dutch company KMG, wrote in a Facebook post yesterday that, after reviewing footage of the accident and inspecting the ride, "excessive corrosion on the interior of the gondola support beam dangerously reduced the beam's wall thickness over the years," ultimately causing the "catastrophic" crash on July 26.

***
(Original Post 8/5/2017): As the Ohio State Fair draws to a close this weekend, the repercussions of the deadly accident on one of its rides that killed 18-year-old Tyler Jerrell has been felt across the country as several fairs outside Ohio have removed similar rides.

New Jersey is the latest location to see such action as officials at the Sussex County Fair, which opened on Friday, have removed from the Wild Claw ride because of its similarity to the Fire Ball ride that malfunctioned at the Ohio State Fair on July 26 in Columbus.

The Wild Claw ride was removed from another New Jersey county fair last week in the immediate aftermath of the Ohio accident.

Other locations that have removed similar rides are:

- The Arapahoe County Fair in Colorado, which removed the similar Freak Out ride.

- The Wisconsin State fair, which also removed the Freak Out ride.

- The Greater Gulf State Fair in Mobile, Alabama, which doesn’t take place until the fall, which removed both the Freak Out ride and the same Fire Ball ride that was at Ohio State Fair.

- And the California State Fair in Sacramento, California, which removed its version of the Fire Ball ride.

Meanwhile, the other victims of the Ohio accident continue their recovery. Of the seven riders who were hurt, four remain hospitalized. Two of those victims, Tamica Dunlap and Keziah Lewis (Jerrell’s girlfriend) remain in serious condition while Russell Franks remains in critical condition.

Another victim, 18-year-old Jennifer Lambert, remains in a coma.

The Ohio State Fair comes to a close on Sunday night but the cloud of shock and sadness that continues to radiate from the accident will continue to be felt long after the lights go off for the year.