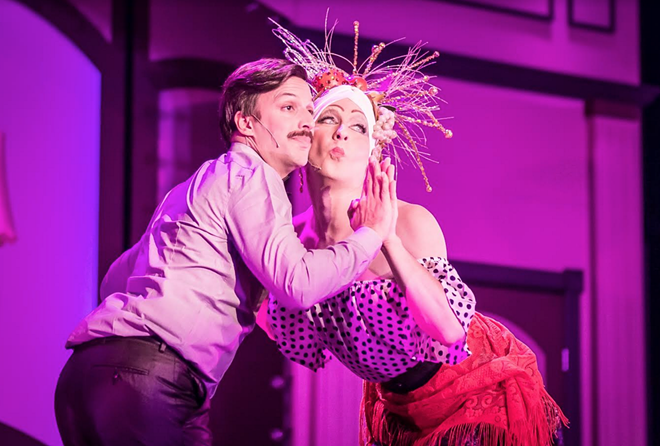 Mercury Theatre Company
When a show has a surplus of heart, it proves that other problems are greatly minimized. Take La Cage Aux Folles, now being produced by the Mercury Theatre Company in South Euclid. With great songs by Jerry Herman and a witty book by Harvey Fierstein, it has all the elements necessary for success.

Still, it needs to be infused with talent on stage, and there are a number of off-notes and missed opportunities in this production. Yet the entire enterprise is saved and even elevated by a genuine fondness for the characters and indomitable energy for which MTC has become famous.

As most people know, it’s the story of two gay men who run a gy nightclub in France, front man Georges and flamboyant Albin, who performs as the glorious Zaza. Their lives are idyllic until Georges’ grown son from an incidental encounter with a woman 20 years before shows up. The son is engaged to Anne, and he wants his dad and Albin to butch it up for a visit from his gal’s parents. Anne’s dad, in particular, is so anti-homosexual he makes Mike Pence look like a gay maitre d’ at a –wait, Mike Pence does look like a gay maitre d’…

Anyhow, let’s focus on what’s right with this show. The drag queens of Les Cagelles are a refreshing change from the standard troupe of fellows who are trotted out in often bulky, overdone femme outfits and then proceed to pose prettily and flutter their false eyelashes.

The boys in this crew are often stripped down to some skimpy, girly outfits and they are focused on executing the athletic moves laid out by choreographer Melissa Bertolone. Even when there are some stumbles, the boys go for it and take no prisoners. They are: Christian Flaherty, Nathan Hoty, Brian Lego, Austin Rubinosky, Brandon Santana, and Jake Washabaugh. And they are bee-yoo-tee-ful!

Of course, the major reason to see this La Cage is to see the theater co-founders, Pierre-Jacques Brault and Brian Marshall, play the lead roles of, respectively, Georges and Albin. Brian is a constant and welcome presence on the MTC stage, and although he doesn’t exactly knock this role out of the park, he lands the moments that count. In particular, his rendering of “I Am What I Am” is quite touching.

One the other hand, Brault rarely performs since he usually directs all the shows, as he does here. His performance, although loaded with charm, could have benefited from a director (other than himself) who might have goosed his characterization a bit.

Fortunately the leads are backed up by some solid actors in smaller roles—Jennifer Myor as Jaqueline, the owner of a café, Andrew Nelin as Jean-Michel, the grown son of Georges, and Rachel Marie Smith as Jean-Michel’s fiancee Anne. Almost as important as any of the people on stage are the dazzling and sometimes daring costumes designed by DW.

There are some aspects of the production, however, that seem to suffer from Brault’s divided attention. In the featured comedy role of Jacob, Georges and Albin’s butler and wannabe maid Jacob, Antonio Brown doesn’t find a strong character hook and consistent through-line, leaving a lot of laughs un-chuckled. And some aspects of the plot get short shrift due to unspecific staging decisions.

But damn, this show has got tons of heart, and the energy to display it without compromise.