ESPN Asks and Answers the Question: Could LeBron Play in the NFL? 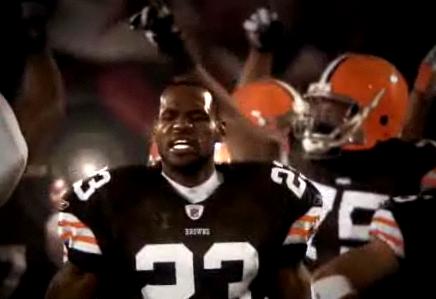 It's been up for debate before. Could LeBron have played in the NFL? He was a standout receiver at St. Vincent St. Mary. His body is a rock solid fortress of athleticism -- 6'8" and over 250 pounds. When he donned a Browns uniform for those State Farm commercials around the Super Bowl there was some lighthearted chatter. And now, ESPN has brought out the big guns, seeking the opinions of everyone from scouts to Bill Parcells on the question. Here's the first part of the story.

Mark Murphy hasn't merely witnessed the finest receivers of his generation. He has experienced them.

Murphy's 11-year career at strong safety was good enough to get him into the Green Bay Packers' Hall of Fame. He has covered, tackled and occasionally been scorched by legends.

On the subject of greatness, he knows what he's talking about.

"I've been around a lot of great receivers," Murphy said. "I tell people that I rate my top receivers — coaching, playing or watching — as James Lofton, Jerry Rice, Steve Largent and LeBron James."

Murphy wasn't delivering a joke or some abstract concept. He meant James, the NBA superduperstar, simply was that spectacular on a football field. Murphy saw it as the defensive coordinator at James' alma mater, St. Vincent-St. Mary High in Akron, Ohio.

The opinions vary from "could be All Pro" to wondering whether Lebron could stand the constant physical battles of the game. But, naturally, no one wanted to bet against LeBron. The consensus being: It wouldn't surprise anyone if he was great.