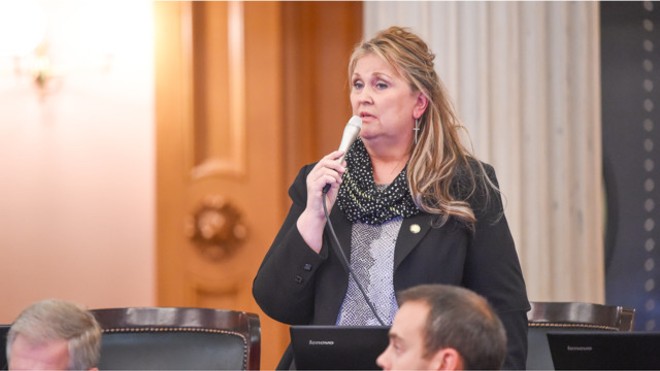 Photo via Ohio House of Representatives
In a surprise move Monday, Ohio Republican Party Chair Jane Timken publicly called on State Rep. Candice Keller of Middletown to step down, following a social media post of Keller's that blamed the recent mass shootings in Texas and Ohio on legalized weed, "snowflakes," Obama, "drag queen advocates" and a whole host of other mind-boggling items.

“Candice Keller’s Facebook post was shocking and utterly unjustifiable,” Timken said in a statement. “Our nation is reeling from these senseless acts of violence and public servants should be working to bring our communities together, not promoting divisiveness.”

This is the first time that Timken, who became Republican chair in 2017, has asked a member of her party to officially resign. Other state GOP officials also distanced themselves from Keller's language.

Keller may be leaving the soon anyway, as she's currently running in the primary for Republican Bill Coley’s Senate seat.

Keller released her own statement following Timken's announcement, saying that "establishment moderates have never been fans of mine because I ran against their endorsement and won. As the only conservative in this race, I will be taking my Senate campaign to the voters to decide."

After every mass shooting, the liberals start the blame game. Why not place the blame where it belongs?

The breakdown of the traditional American family (thank you, transgender, homosexual marriage and drag queen advocates); fatherlessness, a subject no one discusses or believes is relevant; the ignoring of violent video games; the relaxing of laws against criminals (open borders); the acceptance of recreational marijuana; failed school policies (hello, parents who defend misbehaving students): disrespect to law enforcement (thank you, Obama); hatred of our veterans (thank you, professional athletes who hate our flag and National Anthem); the Dem Congress, many members whom are openly anti-Semitic; the culture, which totally ignores the importance of God and the church (until they elect a president); state officeholders, who have no interest whatsoever in learning about our constitution and the Second Amendment; and snowflakes, who can't accept a duly-elected President.

Did I forget anybody? The list is long. And the fury will continue.