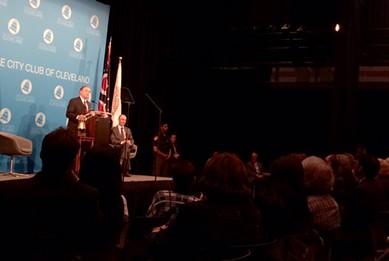 ERIC SANDY / SCENE
From the grandiose Parma Public Library, Executive Armond Budish provided his first State of the County address last night, extolling the virtues of Cleveland current events — LeBron! RNC! Fodor's write-ups! — and exhaling all the standard rhetoric of first-year speeches (e.g. his top priorities: job growth and opportunity, fairness and equity, and a government that "gets results").

"We must do business in a different way than in the past, and that starts with county government," Budish said.

The foundation of his speech was built into a Frank Jacksonian parable about boxes, into which all manner of county services are compartmentalized. In short, Budish said he wants to clean up and streamline basic the county interface. While not committing to a particular path of action, the executive urged ongoing job access and training.

Budish then pivoted toward private innovation (Cleveland was once "the Silicon Valley of the Industrial Revolution," etc.). He raised six specific initiatives, all part of his administration's "innovation agenda":

- a public-private partnership with the Cuyahoga County Public Library system to create innovation centers. These will begin as programs at Garfield, Mayfield and Parma libraries. Mentors from both business incubators and agencies like NASA will be on hand at the libraries to coach budding entrepreneurs through an array of software, including 3-D printing technology.

- two requests for proposals to attract at least $15 million in capital to support startup businesses. Outside of citing the county's "resources," Budish didn't go into much detail on this one.

- the instatement of the Global Center for Health Innovation's new managing director, Fred DeGrandis, who will work along with a new advisory committee. "Under [their leadership], the Global Center will bring together the most powerful health-related innovation programs in the world," Budish said.


- using a guaranteed loan of $2 million to leverage and raise an additional $8 million, which will fund "many more small, female, and minority businesses." Budish positioned this initiative as similar to ECDI, which itself was loaned $550,000 by the county in 2013 and has since gone on to make 111 loans of $2.9 million to small businesses.

- a proposed "community benefits agreement" to address the lack of diversity and equity among county residents and small business owners. Budish also promised to propose legislation that would eliminate the bond certification requirement on county contracting jobs smaller than $250,000. (The latter came under fire later in the night from one man during the Q&A period. Budish said that he's interesting in simply reducing the duplication of certification paperwork.)

- reassigning a member of the economic development department to work as a business ombudsman to help small business owners through the bureaucratic mess that county government can be.