Fare Evasion in Cleveland: What It Is, How Often It Happens, and Who Is Getting Charged

Cleveland Municipal Court records show that the riders charged in the city between 2019-2021 were mostly Black—about 83 percent. 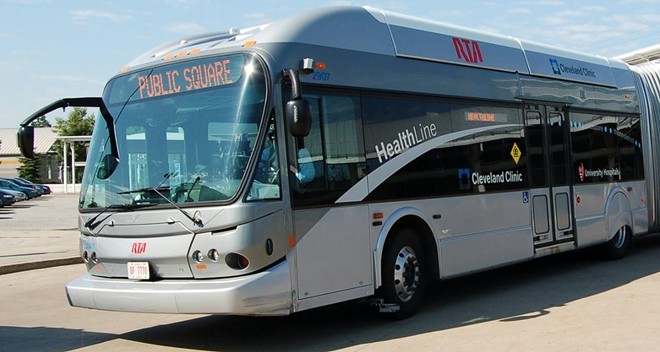 RTA
People who don’t pay public transit fares in Cleveland can get a criminal record, spend up to 30 days in jail, and owe up to $250 in fines. More than a dozen community members have publically addressed Cleveland City Council in 2022 about that reality, sharing this message: No one should face that kind of punishment for not paying transit fare.

Despite that advocacy, and the council introducing legislation to create an option for lesser penalties, the consequences will likely remain the same—a possibility of incarceration and a maximum allowable fine 100 times greater than a one-trip ticket for adults – because the Greater Cleveland Regional Transit Authority follows state, not city, law.

The number of riders cited for the nonpayment of transit fare, known as fare evasion, is low relative to total ridership. The Greater Cleveland Regional Transit Authority (GCRTA) Transit Police cited riders for fare evasion 79 times total in 2020 and 2021, according to Robert Fleig, GCRTA Public Information Officer. Ridership was 15.9 million in 2021, equating to about one fare-evasion citation for every 883,000 riders, he said. Cleveland Municipal Court records show that the riders charged in the city between 2019-2021 were mostly Black—about 83 percent.

Several council members, with support from Mayor Justin Bibb, introduced legislation in April that would amend existing city law to lower the potential financial penalty for fare evasion to $25. It would also remove the possibility of jail time. But, as public commenters pointed out, the proposed law would still classify fare evasion as a fourth-degree misdemeanor, carrying the potential of a criminal conviction and the costs and consequences that come with it.

“Just as no person would ever expect to go to jail over a parking ticket, no person should ever go to jail over a bus pass that costs $2.50,” Natalie Ziegler, CPT vice chair, said in April. Ziegler commended the council for its proposal but said it needed to go further. “The proposed legislation must protect against the collateral consequences of a criminal conviction.”

Ward 3 Council Member Kerry McCormack, a lead sponsor of the city’s pending legislation, told Cleveland Documenters that because GCRTA chooses to cite the state code, the council’s amendment would be “largely symbolic.”

Regardless, CPT would like to see the legislation passed.

Alex Rubin, a volunteer with CPT and a member of the coordinating committee, said the legislation, warts and all, would be a departure from the status quo. And, Rubin hopes the city would use its leverage—namely that the mayor appoints the most board of trustees members (4 of 10)—to influence GCRTA’s policy choice.

“It’s up to the mayor and City Council to sort of determine how important this issue is to them and how much leverage they want to expend,” Rubin said.

Given the campaign of public comments about fare evasion and the city’s pending legislation, Cleveland Documenters sought answers to fundamental questions about the issue: what it is, how often it happens, who is being charged with it, and how it’s enforced.

What is fare evasion?

Fare evasion refers to incidents in which people use public transit without paying the ride fare.

How often are people cited for fare evasion here?

GCRTA Transit Police cited people for fare evasion 61 times in 2020 and 18 times in 2021 in Cleveland and surrounding suburbs, Robert Fleig, GCRTA Public Information Officer, told Cleveland Documenters. Although GCRTA has not fulfilled a record request submitted in April for records showing the number of fare evasion charges from 2019 to 2021, here’s what Cleveland Municipal Court records show for incidents in Cleveland:

Where do the charges occur? 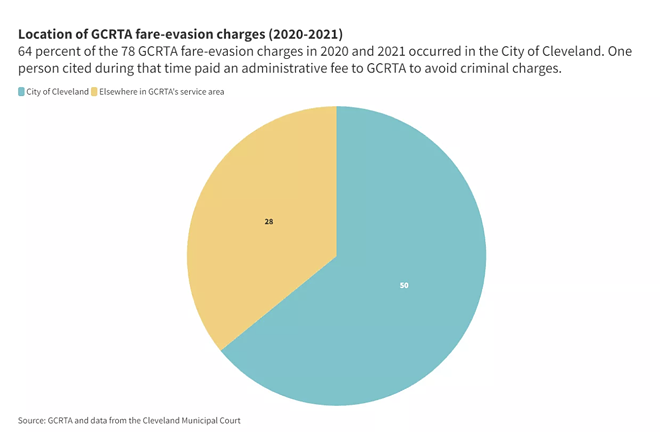 Citations occurred at the highlighted stations — one downtown, the rest on the West Side — in 2020 and 2021, according to Fleig: 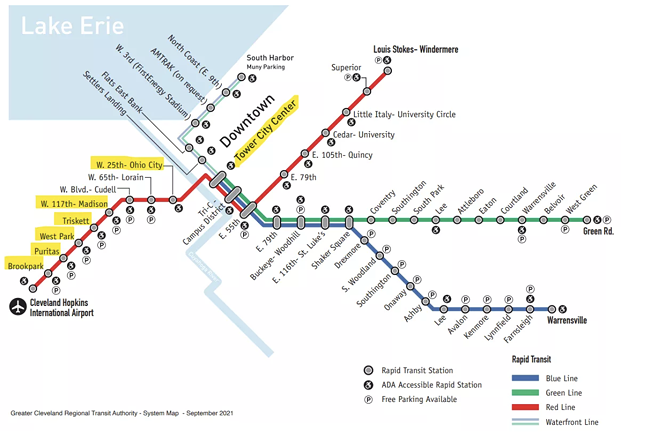 Fleig shared these ridership demographics found by a research company in 2022: 66 percent African American, 20 percent Caucasian, 6 percent Hispanic/Latino, and 8 percent other or preferred not to say. “GCRTA Transit Police officers respond to calls from operators for riders who do not pay their fare; citations are written based on those calls for assistance,” he said.

GCRTA was the arresting agency in all 96 fare evasion cases heard by the Cleveland Municipal Court between 2019 and 2021. The transit authority is piloting a Transit Ambassador program, which will pay civilians to help enforce fare, among other responsibilities. Interviews are underway and are set to wrap up in July, noted by Documenters John Bergin and Kaitlin Bender-Thomas. A 2017 court ruling, reported by Cleveland Scene, said GCRTA’s practice of having Transit Police board buses and trains and ask riders for proof of payment was unconstitutional.

Adults who pay a $25 administrative fee to GCRTA within 72 hours of being cited for fare evasion will not have a criminal citation filed. Otherwise, GCRTA will refer the citation to court for criminal prosecution. Adults can pay those fees here and in person at GCRTA’s Customer Service Center in Tower City. GCRTA issues riders under 18 a written warning for the first incident. The second citation, and any after that, require them to pay $25 within 30 days, or else GCRTA sends the citation to the Cuyahoga County Prosecutor’s office. People under 18 can pay fees here and at Tower City.

No adult paid the fee to avoid criminal processing in 2020; one did in 2021. The Transit Police did not cite anyone under 18 during those years, according to Fleig. In an interview with Cleveland Documenters, neither Michael Gettings, Deputy Chief of Police, nor Floun’say Caver, Chief Operating Officer, could answer why so few people pay the fees.

GCRTA gave no explanation for the dropoff. It isn’t something Transit Police would spend time analyzing, said Gettings, who added that fare evasion accounts for a small fraction of the department’s calls.

What fare evasion law does GCRTA cite, and why?

The GCRTA Transit Police enforce fare evasion under Ohio code 2917.41(A) in all 59 municipalities in Cuyahoga County, instead of using city codes, for consistency, according to Fleig. GCRTA — to the best of its knowledge — has never cited the city law.

How do the existing state and city laws compare?

The state law, as currently written and enforced, has been in effect since 2003. City Council enacted the relevant section of the city code in 2009. City Council amended the code in 2013 by adding more behaviors to legally be considered misconduct on public transit and making a first violation of fare evasion a fourth-degree misdemeanor. Until then, the city code said a first violation was a minor misdemeanor, which carried no possibility of incarceration and a maximum $150 fine.

Here’s how the current and pending laws compare: 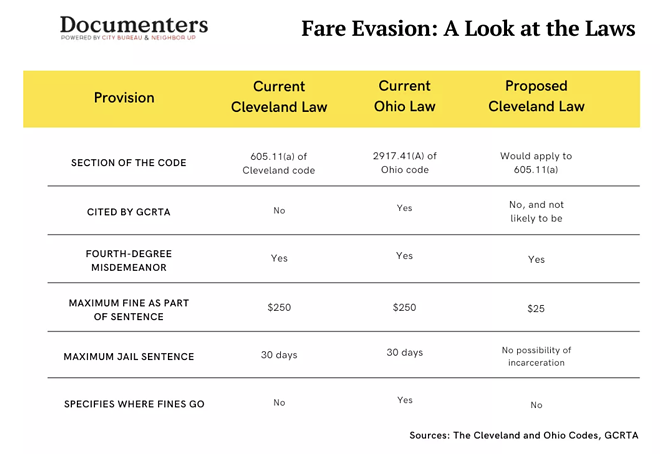 The state law specifies that 75 percent of each fine paid for violating the law goes to the treasury of the county where the incident happened. The rest goes to the body operating the transit system — in this case, GCRTA. The city code does not specify where fines must go.

What’s the status of the pending legislation?

McCormack delayed discussion of the city’s pending amendment at a June 1 Transportation and Mobility Committee meeting. McCormack, who chairs the committee, said in the meeting that the city’s attorneys were looking at the matter, and given the robust public input, he was putting the legislation on hold for the moment, as noted by Documenter Christina Easter.

Some public commenters asked the council to enter a memorandum of understanding (MOU) with GCRTA requiring the transit authority to cite only the city code, if amended, not the state code. Would GCRTA consider that?

Gettings and Caver dismissed the idea of adopting city-specific policies regarding fare evasion in any of the municipalities GCRTA operates in. GCRTA gets its authority from the state, not any one city, they said, adding that GCRTA has to remain regional with its policy.

Rachel Dissell contributed to this reporting.