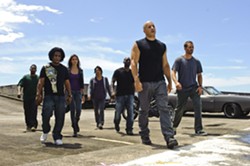 The city of Cleveland has released a full list of roads to avoid (or, watch the action) during the shooting for Fast & Furious 8.

Again, Cleveland was chosen for secondary photography meaning you most likely won't be seeing the main cast drifting along East 9th Street.

RTA is also adjusting its routes along streets where shooting will take place, so make sure to regularly check your normal bus and trolley routes.

Just like the last time Hollywood descended upon Cleveland, there will be road closures involved:


Rockwell Avenue is expected to remain open during shooting, and sidewalks in the area will have limited access. If you want to watch the action (speeding cars, yes!), most of the shooting will go down at E. 6th St. and Superior Avenue.

Several RTA routes will also be rerouted during shooting, so check with RTA.com for more information.

Update: We can expect clogged Cleveland streets and tons of fans waiting to catch a glimpse of filming for Fast & Furious 8 between May and June.

The filmmakers just announced that's when the bulk of secondary photography for the movie will commence.

Filming for the Fast & Furious 8 is coming to Cleveland soon, just don't expect to take any selfies with Vin Diesel.

News of the shoot was mentioned at the Cleveland International Film Festival, and there's even a posting on the Greater Cleveland Film Commission's job page requesting crew member and vendor submissions.

The call for submissions is only for work with the film's second crew, meaning there probably won't be any big names here in town. Instead, a lot of action sequences and b-roll will be shot here, so we can still expect some traffic trouble once shooting begins. No exact dates have been announced yet, but expect it to be somewhere between mid-April and mid-June.

The film's first unit are expected to shoot in New York City and Atlanta, with the possibility of Cuba on the table. Ludacris, Vin Diesel, Tyrese Gibson, Michelle Rodriguez, Jason Statham and Lucas Black are all expected to return for the latest installment of the film.