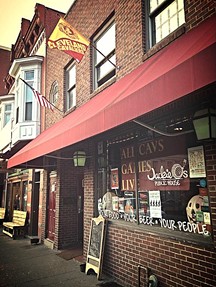 JACKIE O'S
Last month, a horrible fire destroyed multiple businesses on West Union Street in Athens. Some were only partially ravaged; others, like the beloved Union, were burnt completely.

This week, Fat Head's Brewery will be raising funds for the Athens community and Jackie O's Pub and Brewery, which saw smoke and water damage to the building's interior (mostly on the newer Public House side).

The latest from the Athens News:


Art Oestrike, owner of Jackie O's, said Friday that despite the state of his kitchen on the Public House side, which has no roof over it and extensive damage from the fire, the pub and brewery now has a small setup for customers to order food from the brewery side of his business on W. Union Street.

"I'm just excited and really humbled by the support that we've gotten," Oestrike said via phone amid noise of employees working behind him. "I really want everyone to know that we are open every single day for lunch and dinner on the small side (Brewpub side).

Note that this event is taking place at Fat Head's brewery, which is at 18471 Sheldon Road in Middleburg Heights.

If you ever happen to find yourself in Athens, do yourself a favor and sidle up to the bar at Jackie O's. It's a wonderful place.