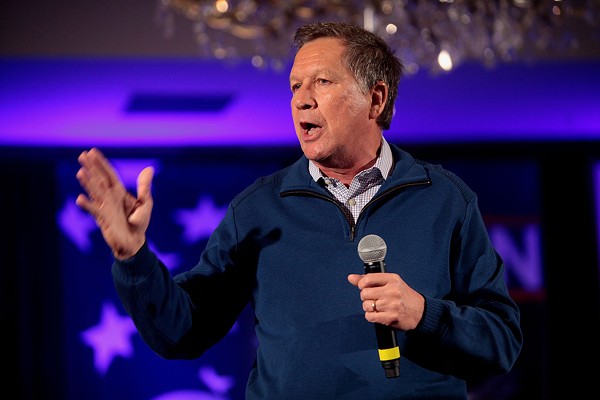 Gage Skidmore, Wikipedia
Fred Guttenberg's daughter Jaime was one of the 17 victims in the tragic shooting at Marjory Stoneman Douglas high school in Parkland, Florida. Yesterday, he stood alongside Ohio Governor John Kasich in support of his proposed gun laws.

Kasich has proposed that Ohio develop bi-partisan "red flag" laws, which allow a judge to allow law enforcement to confiscate guns from an individual that may be a risk to themselves or others. This order would be temporary.

"One of the major features of the bill, is if somebody is emotionally unstable and poses a risk, both to themselves and others, it only stands to reason that through an approach to the court, that person would lose their guns," Kasich said at a news conference. "That is not a violation of anybody's Second Amendment."

Guttenberg then spoke: "Anything other than common sense gun safety would have solved the issue that happened to my daughter. It's common sense. It doesn't take away anybody's right."

After the Parkland shooting, Florida became the sixth state to pass a red flag gun law, joining California, Connecticut, Indiana, Oregon, Washington. Ohio is currently one of 18 other states proposing this legislation.

On March 21, Ohio democratic senators Joe Schiavoni (currently running for the Democratic governor nomination) and Sandra Williams introduced their own common-sense/red flag bill. Similar to the proposed legislation backed by Kasich, the bill would grant family members and law enforcement officials the option to petition a court to issue temporary removal of firearms from a gun owner showcasing that they are in "imminent danger" of harming themselves or others.

Temporary removals would be issued for 14 days before a hearing on the owner's merits is held. Judges would then have the option to issue the order of firearm removal for up to one year.