Fine Acting Can't Save None Too Fragile's 'Neville's Island,' A Tired Old Tale of Middle-Class Ennui 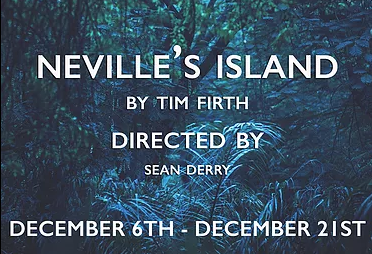 Four middle-aged Brits wash up on a desert island: a grouch, a nerd, a peacekeeper and a pious man. It makes a great setup for a joke. But while Neville’s Island evokes a number of laughs, the punchlines ultimately prove stale and the stakes never feel high enough to merit much audience investment. The 1992 play by Tim Firth is now in performance at None Too Fragile Theatre in Akron, where it continues through Dec. 21.

The four men in question are a team of middle-management coworkers, taking part in a teambuilding event designed by their employer. From the moment the quartet climbs out of the water, it becomes clear this group is dreadfully off course. Indeed, team leader Neville has so vastly over-interpreted that morning’s set of clues that he and his fellows are now ship-wrecked (or more factually, boat-wrecked) in November on a small, deserted island in Northern England’s Lake District.

Funny thing is, the foursome’s hotel is directly across the water, a mere 200 yards away. They can see the streetlights that represent sanctuary; they listen in dismay as a ferry full of partyers passes by their shore. They have even used the last bit of juice from their one dying cellphone (a novelty, no doubt, when this play was written, but a plot device that rings false by today’s ultra-connected standards) to place a rescue call. Yet all has been for naught: Cold and hungry, the four wait, Godot-like, for salvation, whilst the veneer of civilization sloughs away, a la Lord of the Flies.

Those are, of course, enormous literary boots that this work in no way fills. But the play has also drawn comparisons to Survivor and the British version of The Office, and certainly there are hints of each contained within its long, sometimes plodding, two-hour and 20-minute run time.

But while the material is slight and dated, the four stalwart actors do a worthy job of crafting distinct characters out of what is basically a passel of clichés.
As the mild-mannered Neville, David Peacock gives us a willing, if ineffectual, team leader whose sincerest wish is that everyone would just calm down. As the nerdy, gadget-obsessed Angus, Robert Branch is a gas, infusing his high-pitched voice with a wee bit of whine, and fussing over what must be the most magnificent comb-over ever to grace a Northeast Ohio stage. In the second act — when Angus et al have given up on appearances and that comb-over has disintegrated into a unruly hank of hair – Branch masterfully turns this weakling into a wild man, complete with a terrifying grimace, a menacing machete, and unanswerable questions about the meaning of male, middle-class life. It is Angus’ unfolding existential crisis, in fact, that gives the play much of the slight gravitas it carries, and Branch works it for all it is worth.

The best lines arrive by way of the bullying Gordon, a character so sad, lonely and fearful that he equips himself with an arsenal of insults, putdowns and funny-not-funny jokes at the expense of his fellow castaways. While some of the jabs – especially those aimed at Christianity – might have seemed provocative 28 years ago, this is a far different age, and even Gordon’s cruelest verbal grenades tend to settle rather than explode. Still, Gerard McDermott imbues Gordon with more nuance than one might rightfully expect from the stereotype: By turns belligerent, sardonic, frightened and lost, McDermott’s Gordon is the vivid center around which the action unfolds.

On the receiving end of many of Gordon’s sharpest assaults is Roy, a bird-watching Christian whose newfound faith is apparently the result of suicidal depression following his mother’s death. Roy is the most complex character of the lot, and actor Andrew Narten endows him with a raw physicality that transmits both fragility and courage. Settled in a treetop, Roy’s prayer of thanks to the God who created birds – “hands full of pure poetry, and You fashioned them and made them fly” – is a moment of true beauty. Turns out, it also makes the final, blood-splattered 10 minutes of the play a puzzler. To avoid spoilers here, we will tread cautiously, but: Is Roy’s final act one of communion, or is it a descent into utter barbarity?

Sean Derry, NTF co-founder and co-artistic director, helms this production of Neville’s Island, and during a pre-show toast (an NTF tradition) he noted that – thanks to the size of the book and, probably, also to some cast changes that delayed the originally planned opening by a month — it had been “a hell of a rehearsal process.” Unfortunately, on opening night, there were still some rough patches. Actors frequently flubbed and/or stepped on each other’s lines; at least one sound cue was missed; a recalcitrant propane stove refused to ignite, prompting McDermott to break the fourth wall and ask us to imagine it aflame; and the resulting smell of non-combusted propane lead at least a few audience members to fear an explosion. All of which meant that whenever Roy was perched in his loudly squeaking “treetop,” our worry that we might witness a technical disaster did not seem especially farfetched.

Squeaky trees notwithstanding, the detailed set design, also by Derry, generally serves the story well, functionally placing us on the rocky shoreline of a heavily forested island, complete with lapping water, towering evergreens and rolling mists. While background sounds of the forest are largely, and strangely, absent, sound designer Brian Kenneth Armour and lighting designer Marcus Dana have created several engaging, well-integrated effects including mainland fireworks and a ferry boat passing near shore, complete with DJ patter and disco lights.

None Too Fragile’s 2020 season launches on Jan. 31. Season memberships are now on sale.