For Better or Worse, Thousands of Cans of Skyline Filled With Cream of Chicken Soup Instead of Chili 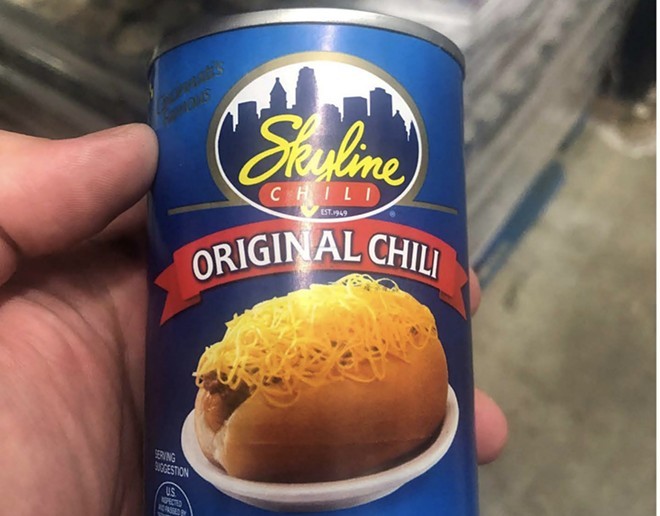 USDA
Chili? Don't be so sure
If you were excited to make Skyline dip, a four-way, or simply drink it fresh from the tap, you may have been slightly confused recently when you popped your can of chili and saw what looked like Velveeta cheese instead of the usual delicious chili mix.

It happened to multiple Cincinnati Reddit users, who took to the platform to ask what the heck was inside their can of Skyline instead of Skyline. The answer: cream of chicken condensed soup.

Apparently, more than 3,000 cans of chili were mislabeled by the canner.

In a statement, Skyline Vice President of Marketing Sarah Sicking said: “Morgan Foods, a major Midwest canner of grocery products, mistakenly mislabeled 3,360 cans of 10.5 oz. Cream of Chicken Condensed Soup as 10.5 oz. Skyline Chili. The USDA has issued a recall of the cans. Consumers can identify the mislabeled 10.5 oz. Skyline Chili cans by looking at the bottom of the can and observing the code lettering 'UPY.' The recalled cans should be returned by consumers for purchase credit at the retail outlet where it was obtained.”

The USDA says the cans are being recalled due to "misbranding and undeclared allergens."

"The product contains milk, wheat, and soy, which are known allergens and are not declared on the product label," says the recall.