For Cavs Fans in Los Angeles, Conflicted Feelings on LeBron's Move to the Lakers 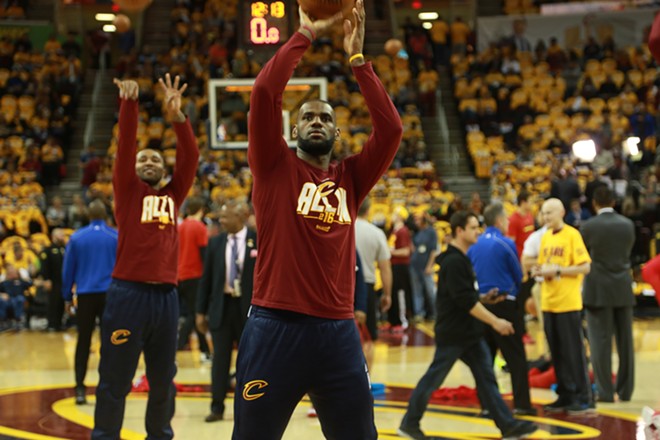 Andrew Woods, a freelance writer and podcaster, woke up in sunny Los Angeles feeling the same way as the rest of the city of Cleveland. "I haven't been able to fully articulate how I feel about LeBron leaving the Cavs," he tells Scene. "I will say, it's strange to be sad about him coming to the city I live in."

That means getting to see a whole lot more of LeBron, and with the benefit of the action happening in their time zone.

Still, it's not like rooting interests just switch from wine and gold to purple and gold.

"I'm still trying to process it all this morning as I wake up," says actor and diehard Cavs fan Ed Ackerman. "I feel gut punched, as opposed to 2010 when I felt dick punched and outraged."

I refuse to root for the #Lakers. #GoCavs


Part of the gut-punch probably comes from LeBron's "I'm Coming Home" letter, penned after his four-year stint in Miami in which he claimed he wanted to finish his career in Cleveland.

"I’ve been following the man his entire career," Ackerman says. "I graduated from the University of Akron when he was just a 'kid from Akron,' and if you paid attention to area sports, you heard about LeBron James." Ackerman even used to cover Lebron's games during his collegiate years as a top rated radio personality with radio station, WZIP-FM.

Before Ed Ackerman moved to pursue an acting career in Los Angeles in 2003, he was sitting at a bar on West 6th Street with Cavs super fan (and General Manager of Rick Case Honda) Jason Herron and comedian Mike Polk Jr. the night LeBron James was drafted by the Cleveland Cavaliers.

Ackerman happily recounts the excitement in the bar on draft night, noting that Herron even bought the entire bar a round of Jaeger Bombs. "The future was bright," he says.

Former Clevelanders turned Angelenos are trying to process LeBron's move. WWE Superstar Mike "The Miz" Mizanin has publicly expressed his love for the Cavs and King James for years, but today's social media display was a bit more somber.

.@KingJames to the @Lakers......
Don’t call. Don’t text. I need a minute. pic.twitter.com/ZyIcpYZBIl


Freelance writer Jeremy "Mr. Beaks" Smith became obsessed with basketball like most '80s kids with the arrival of Magic Johnson and Larry Bird. Sure, the Cavs were a laughingstock before around that time, but since they were the Cleveland team, Smith rooted on the likes of World B. Free, Cliff Robinson and Phil Hubbard as they struggled to win more than thirty games a season.

"When the Cavs won the draft lottery in 2003, it felt too good to be true. They'd certainly earned the number one pick after playing several seasons of the most unwatchable basketball I've ever witnessed, but with the exception of the 1997 Kemp trade, the Cavs had never landed the superstar," says Smith. "Now they had the most exciting can't-miss prospect since Shaq, and best of all, he was a local kid. We thought he'd never leave."

I’ve been a Cavs fan my entire life, but I will always enjoy watching a Randian, Trump-supporting dirtbag like Dan Gilbert get played. (Someone screencap this and tweet it to him, please. He blocked me years ago.)


"We know he'll continue to give back to the community that brought him up regardless of where he plays basketball," says Smith. "That's the miracle of LeBron. He's one of the best things to happen to Northeast Ohio."

Everyone was in agreement that this is a very different situation than 2010, and the feeling this time around is more sorrowful than it is vengeful. "I’ll be fine with it," says Ackerman. "I certainly won’t be burning my LeBron Jersey this time around."

LeBron's move also causes some conflicting feelings for Cavs fans, knowing they'll be playing in the same conference as Golden State. "As much as I hate the Lakers, I hope he kicks the Warriors' ass," Smith says.

Smith even penned his own theory today, believing that LeBron James really did intend on staying in Cleveland...until The Golden State Warriors happened.

Andrew Woods echoed the sentiments of Smith, saying "I have nothing but respect and admiration for LeBron and I wish him nothing but the best, and I will definitely be rooting for him when the eventual Lakers vs. Warriors series happens."


.@KingJames I just thought you should know there's no Swenson's out here.


These Los Angeles residents may have LeBron closer to their backyards, but it's not the same unless he's wearing the wine and gold.

For Ackerman, "I certainly loved cheering for him, but I refuse to cheer for the Lakers," he says. "They’re simply not the Cavs."