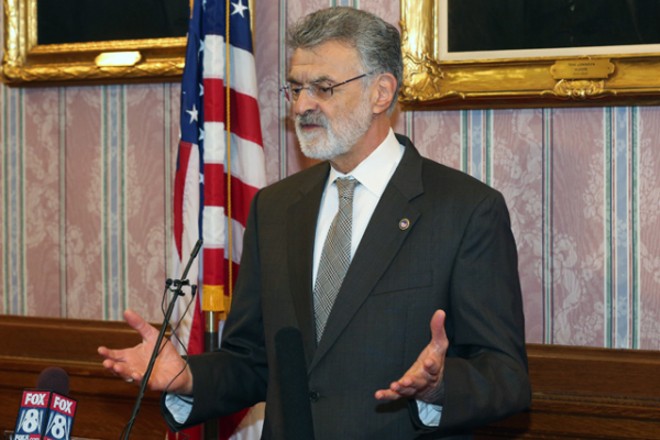 He said the ordinances (some of them already passed, some of them pending, some of them new) were in keeping with statements he's made in the past about measuring a city's success by the extent to which all people get to "participate in prosperity."

As the election season heats up — Cleveland's primaries will be held on Sep. 12 — Jackson's mayoral challengers contend that the so-called "Healthy Neighborhoods" initiative is a political ploy, presented in reaction to a recurring accusation against him: that he has encouraged downtown development at the expense of Cleveland's struggling neighborhoods. Jackson refuted that idea, over the weekend, by arguing that the Quicken Loans arena renovation was "an investment in Cleveland's neighborhoods."

The agenda, politically motivated or not, is a much more rational refutation. Jackson said he planned to introduce the package in full on Monday. (A summary of the legislation can be found here):

The collection of ordinances allocate funding from a $25 million pot of funds from a $100 million bond issuance two years ago and from revenue received through the income tax increase passed last year. Jackson thanked Cleveland voters for their support of Issue 32 more than once during his remarks.

The ordinances focus primarily on economic development and violence reduction.

On the economic development side, one ordinance would create mixed-use developments in targeted neighborhoods. Another would allocate funding for home rehabilitation. Another would authorize the Economic Development director to provide funds to help encourage entrepreneurship and retail in neighborhoods "where the traditional development model might not have worked." Jackson also said that the city would partner with Habitat for Humanity to build 25 new homes.

On the violence reduction side, Jackson announced ordinances to accept funding for a Safe Routes to School program, to add money to a "hospital-based violence interruption program" (which would be overseen by the Cleveland Peacemakers) and to partner with Case Western for youth violence data tracking.

Jackson also announced the allocation of $17.9 million from the increased tax revenue for the rehabilitation, renovation and/or replacement of portions of rec centers across the city.

Here is the press conference in its entirety.


Councilman and Mayoral challenger Zack Reed was dumbfounded when he heard the remarks, he said, because the new "agenda" felt carbon-copied from his own.

"And now he wants to rehab houses? All he ever wanted to do was demo demo demo," Reed said. (Jackson also announced that the city would be contributing $5 million to an existing $5 million fund from other sources for demolitions.)

Reed said he read both the legislative summary and the account in Cleveland.com this morning and discovered that he and the Mayor now seem to have very similar ideas.

"The only difference is, he's had 12 years to implement his plan. We've had three weeks to put this together. All we want is four years." Reed reiterated his campaign slogan, that Jackson has neither the leadership nor the vision to lead Cleveland into the future. But he added two new qualities to the list of Jackson's deficiencies. Said Reed, "He doesn't have the energy or the imagination either."

Jeff Johnson also found the remarks disingenuous. Where Reed has made violence-reduction (via jobs) the central theme of his campaign, Johnson has hammered 'Neighborhoods' as his marquee buzzword.

"I think it's totally disrespectful, in the 12th year of his term, for [Jackson] to come out as this champion of neighborhoods," Johnson said. "My reaction is this is clearly an election year effort to come off as something that he has proven not to be."

Johnson said it's telling that Jackson waited for an election year to hire an an "anti-violence person" (Duane Deskins) and to allocate the $25 million that's just been sitting around, untouched.

Johnson conceded that some of the ordinances were good ideas, though he argued Jackson was attempting to take credit for existing ideas, the Safe Route to Schools plan, for example, which has been citizen-led for years (and expanded lately in response to the murder of 14-year-old Alianna DeFreeze). He said that Jackson has successfully communicated important ideas about neighborhood development as well — "his new [communications] team must be working overtimes," — but that the ideas weren't the problem.

"With this administration," said Johnson, "the problem has always been going from ideas to implementation."