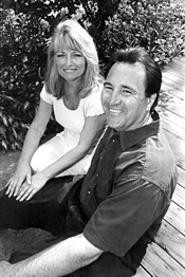 Walter Novak
Anna and Michael Ferrante are unharmed only because the cops couldn't shoot straight.
One afternoon last November, a stricken Len Barker walked in the door and told his wife, Eva, that her parents were last seen speeding away from gunshots.

A subcontractor working for the former Indians pitcher had called him with a hazy report about a shooting. When Len told Eva, she dialed her parents' cell phones. For 30 agonizing minutes, there was no answer. Eva looked at her son and thought, "His grandparents are dead."

Finally, the phone rang. An unidentified voice said that her parents were OK, but that he could say no more.

Eight months later, Michael Ferrante, Eva's father, faces serious criminal charges, including two felony counts of assaulting a police officer. The Ferrantes insist it was all a terrible mistake. Michael and wife Anna are alive only because of the failed marksmanship of two Cleveland police officers, who fired eight shots at them from close range. Police and prosecutors, in turn, believe that a 55-year-old salesman, contractor, and active parishioner with no record rammed a patrol car and led police on a high-speed chase, simply to beat a gun-possession charge.

Depending upon who's doing the talking, it's either a case of a grandfather who panicked in the face of a minor offense or of police trying to cover up a near-deadly case of mistaken identity.

That November morning, Jessie Presswood, a 45-year-old TRW worker and part-time scavenger, was passing through North Collinwood with his wife when he noticed some scrap metal piled on a curb. He often rescues spare parts and old sinks left for the trash hauler. "If I see it, I get it," he says.

As he eyed some scrap from his red Ford Ranger, Presswood noticed a white man carrying a gun at his side. "The guy wasn't bothering anyone. He was just walking up and down the street with a pistol." Just the same, Presswood dialed 911 and gave police a description of the man and his truck.

The Ferrantes remember these moments differently. They were checking on a fire-damaged house at East 149th Street and Lytton Avenue. The Ferrantes help run Perfect Pitch Construction, a remodeling business named for the perfect game Len threw in 1981.

As they unloaded materials from their Dodge Dakota, they grew suspicious of a rusting red pickup driving slowly past the house. "It actually stopped and backed up, almost to see what we were doing," Michael says. The occupants -- presumably Presswood and his wife -- seemed to be casing them.

Nerves tingling, the Ferrantes readied to leave. As they fastened their seat belts, a blue Taurus swerved around the driver's side of their truck and blocked it against the curb. A man leaped out of the car, the Ferrantes say, pointed a gun, and yelled, "Get the fuck out of the car!" Anna says the man looked scruffy and wild. Michael says he looked enraged, out of control. "I'm 55 and I've never been so scared in my life," he says.

"He's gonna kill us! Get out of here!" Anna says she yelled to her husband.

Michael put the Dakota into reverse. He felt a scraping thud, but insists he didn't know that a police cruiser had come up on his rear. "I didn't see it," he says.

Guns fired. Michael pushed his wife's head down. A bullet hit the rearview mirror. Panicked, Michael steered around the Taurus and speeded down Lytton Avenue. The rear window shattered from another gun blast.

Michael turned north and then west, onto Lakeshore Boulevard. He was shocked to find the Taurus and the cruiser in pursuit. Anna says she saw the patrol car, but she believed it was after the Taurus. Michael took the on-ramp to I-90. Other police cars had now joined the chase, which neared the Martin Luther King Drive exit. A squad car pulled alongside Michael's truck. The officer pointed a gun and ordered him to pull over. He did.

Police extracted Michael and Anna from the truck and pressed them to the ground. Michael says he kept telling the officers, "You're making a big mistake." Anna pleaded for police to arrest the man who was chasing them. But the "wild" man in the Taurus turned out to be a cop, Sixth District Detective George Peters.

Even as they sat handcuffed in separate cruisers, the Ferrantes thought sense would prevail. Eva believes the anonymous call she says she received was placed by a policeman sympathetic to the Ferrantes' ordeal. But instead of being sent home with a handshake and an apology, Michael was arrested and spent the night in jail.

A month later, he was indicted for felonious assault, failure to comply with an order, obstructing official business, and possession of criminal tools. The "tool," as it were, was the truck. To the Ferrantes, what began as a mix-up soon started looking like a frame-up. As they see it, the prosecutor's office is helping police mop up a stop gone bad. After all, for police to say they didn't fire on innocent grandparents, Michael Ferrante needs to be guilty of something.

As a professional class, only physicians are less willing than the police to admit to a mistake, and under William Mason's direction, the prosecutor's office tends to assume the worst about any defendant. Moreover, it's plausible that Ferrante saw Detective Peters as a thug. His car was unmarked, he was not in uniform, and his badge was attached to his belt, where it could have been obscured from view. Police were unable to recall if the light on his dash was activated.

At trial, Koblentz is prepared to call about a dozen witnesses to testify to his client's generous and law-abiding character. David Omerza knows Michael Ferrante through St. Helen Parish in Newbury. "You couldn't have a more trusting friend," Omerza says. Together they've coached CYO teams and, ironically, ministered to inmates at the Geauga County Jail. Before his experience last fall, Michael listened to inmates' stories with polite disbelief. "I always used to think, 'They must have done something, or else they wouldn't be there,'" he says. Now he knows there are two sides to every story.

Yet police believe Ferrante's panic stemmed from guilt, not bewilderment.

After receiving Presswood's 911 call, police dispatch sent out a Code One -- a felony in progress. Peters and Patrolman Richard Collier responded. As they approached the intersection reported by the caller, they shut off their sirens. They saw a man fitting the 911 description, walking from the house to his truck.

The man entered his truck hastily, so the officers moved in. Peters angled his Taurus in front of the truck; Collier moved in behind. They exited their vehicles, guns drawn, and shouted, "Let me see your hands, let me see your hands! Cleveland police, Cleveland police!" Six times this was repeated, the officers assert. The man and a blond female passenger "were just ducking and making movements in the truck," Collier testified.

Kimberly Dixon, who lives at the corner of East 149th and Lytton, says she raced to a window when she heard a commotion. The police barked their commands clearly. "Ain't no way he couldn't of heard them say, 'Police, police!'" she says.

Collier said he saw the driver look over his shoulder before backing into the cruiser. After striking the patrol car, the truck then geared forward. Peters, crouching behind the trunk of his car, feared the driver was aiming for him. "I said, 'My God, I'm going to die,' and I really thought I was," Peters says. He fired two shots. Collier fired two shots of his own.

The truck curved around the Taurus and headed west on Lytton. Each officer fired two more rounds before giving chase. Six or seven police cars joined the pursuit on I-90. Peters said he saw smoke and rubber shooting from the truck's tires and thought it might tip over.

Collier pulled alongside the truck. Gun in hand, he yelled, "Pull over! Pull over!" Collier said the driver of the truck shrugged as if to say, "Who, me?" before pulling over.

But the question remains: Why would Ferrante run? Assistant Prosecutor Kim Mahaney believes he had a gun. If so, he wouldn't be the first builder working in a dodgy neighborhood to arm himself. The prosecutor thinks Ferrante tossed the weapon during the chase, but no gun has been recovered. "When guns are thrown out of the window, people pick them up," Mahaney explains, adding, "There might be one officer that saw him throwing a black object from the car."

To some degree, both sides' arguments require a suspension of logic. The police version asks one to believe that Ferrante would risk his life and that of his wife to escape a mere gun-possession charge. To believe Ferrante, however, one must buy the assertion that Presswood is lying or mistaken about seeing him toting a gun, that Ferrante didn't see the patrol car behind him, that Collier and Peters didn't properly announce themselves as police, and that it took three miles for Ferrante to realize a half-dozen police cars were chasing him and not a maniac in a Taurus.

For now, neither side seems interested in a plea bargain. "His actions, we believe, were willful," Mahaney says.

Counters Ferrante: "I'm not guilty. Why should an innocent man plead to a crime I didn't do?"

He'll have to maintain his innocence with less income. A few weeks ago, the industrial packaging firm where he works put him on leave, pending the case's outcome. In the meantime, Ferrante is learning more about construction, the side business that led him to Collinwood in the first place.