Give it up for the hometown boy. Just don't make it a habit. 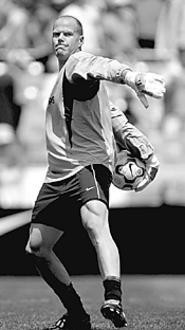 Brad Friedel, the pride of Bay Village.
Okay, so we're all supposed to be excited about Brad Friedel, the Bay Village guy who kicked ass and took names for the U.S. World Cup team. He recorded the first shutout by an American goalie in 52 years. He led a surprising run by the U.S., which finished last in the 1998 World Cup, which was won by France, which is like getting punched out by a florist.

More to the point, Friedel and his buddies scammed a free trip to Japan and South Korea. Any Cleveland boy who, at age 31, has managed to stay out of the cubicle farm and the factory to find gainful work prancing around a field and playing something that vaguely resembles kickball deserves our respect and admiration. It is a tribute to the much-maligned Ohio school system, proof that -- though we suck at math and science -- we still excel in that scholastic tradition that made this state great: the scamming arts.

But while we're happy for Friedel, it's difficult to get excited about the TV news crews coming to town, the front-page photos of our hometown boy in all his glory. This, after all, is soccer. And soccer is not a sport.

Every few years, pointy-head commentators -- like the one you're reading now -- lament America's disinterest in this most epic of games. It's the world's most popular sport, they say: a game of skill, of pastoral beauty, of . . . [insert George Will-like riff equating it to life itself]. The implication is that we're not sophisticated enough to grasp its majesty and subtle strategies.

Which, of course, is bullshit.

Get a load of the players, with their sensitive ponytails and their itty-bitty pipes. Not one of 'em looks like he could hit in the three slot on your bar softball team. They're the kind of guys who likely spend their free time drinking ginseng tea and worrying about their thighs getting fat. Decent Americans know that real athletes spit, swagger, whine about being disrespected, and trade references on paternity lawyers.

Nor does soccer offer the heroic battles incumbent in true athletics. In real sports -- as defined by football, basketball, baseball, and hockey -- one's foe is a mighty power, say New York, Philly, or Chicago. In the World Cup, America played Portugal, South Korea, Poland, and Mexico -- countries that can be purchased on layaway. Telling is the fact that Germany -- whose lone national asset is an ability to frown a lot -- is a power in soccer. So is France, for chrissakes.

Consider it the sissification of sport. For years, agents provocateurs have tried to undermine this country by pushing dainty games on our unsuspecting youth. See golf, which involves men dressed like retirees from Palm Beach apparently getting lost in a park. See cycling, played by morons too dumb to steal a car. See NASCAR, which amounts to sitting on your ass for three hours, which used to be called Getting Stuck in Road Construction on the Ohio Turnpike. To invoke the Scriptures, as God said to Moses in Lascivious version 3.0: "Jesus, Mo, you call skateboarding a sport? You're embarrassing me over here." It's getting so bad you could put up a scoreboard, throw rocks through your neighbor's window, and get a three-year contract from ESPN2.

Real sports, as we all know, must include clubbing, ramming, and taunting; stadium extortion plots; court dockets; labor strife; men enlarged by steroids and freak genetics, decked in tattoos of questionable aesthetic value, all running in frenzied pursuit of paychecks with many zeros. They personify what's wonderful -- or perhaps what's sick, but nonetheless highly effective -- about this great country of ours. And you will find none of it in the World Cup.

This isn't to dog Friedel. We should celebrate his triumph as we do all great triumphs, like when your cousin graduates from the sheet metal workers' apprentice program, or when your kid stands up to the school bully and wins a draw after three rounds. Friedel has achieved what few other Clevelanders have -- namely, a vacation to Japan on somebody else's dime.

And it's OK to take some small bit of pride in America's good showing. We confronted the world's favorite game, kicked some respectable ass, and did it with our 17th-string athletes, guys who'd likely have trouble making the Akron Zips' kick-return team. It's not easy being a 21st-century superpower, after all. Gone are the days when you could colonize a handful of countries on every continent. We gotta take our gloating where we can get it.

But let's not get carried away. The day we embrace a game played by Eurotrash supermodels is the day America becomes a has-been global force, like Spain. Nobody talks about Spain anymore.