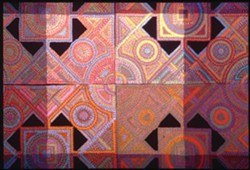 Quisgard
Before the Student and Merit Scholar Exhibitions later this spring, The Galleries at Cleveland State University has one more set of exhibitions opening this week, with a reception from 5 to 9 p.m. this Thursday, March 10. Come early for a Gallery Talk with the artists and organizers at 4 p.m.

The North Gallery hosts The Ornamental Impulse: Form, Pattern and Color by New York-based artist Liz Whitney Quisgard. The exhibition spans two decades of work by the world-renowned artist. Quisgard has offered many of the works in the exhibition as a gift to CSU.

“Her art is a manifestation of a compelling, personal quest for visual splendor. Propitiously for CSU, Liz Whitney Quisgard has graciously offered many of the works in the exhibition as a gift to Cleveland State University," says Robert Thurmer, director of the Galleries at CSU. "Summing up her art practice, Quisgard writes: ‘What you see is what you get’ – an expression of her firm conviction that in essence, visual art is strictly visual in the end, without reference to anything outside of itself. No meaning, no symbols, no politics, no philosophy, no ‘causes,’ no allusions to the human condition.”

Tightrope: Walk the Line is a wall installation in the Center Gallery by Cleveland Heights-based artist, musician and transgender community advocate Craig Matis. Though not a transgender individual himself, Matis considers himself an ally.

“In the Center Gallery, Craig Matis presents a wall installation that addresses the subject of the trans community, and other works including artist books, video with original music and graphic works in his signature style and sensibility,” Thurmer says.

Matis explains: “I am not trans, but speaking from the perspective of an ally, and based upon readings and interviews I conducted with trans individuals, I have attempted to express, through the creation of this work, the frustration, anger, and isolation that can often be part of living as a trans human being.”

Ron Kroutel’s Go Figure: The Lone Figure as Subject examines the psychological ramifications of the lone figure as his subject matter in this exhibition in the South Gallery. Kroutel is an art professor at Ohio University in Athens. Similar to MOCA Cleveland’s current exhibition, Stranger, Go Figure presents compelling images of the human form as a representation of the interior psychological experience of the isolated individual.

Kroutel explains: “The placement of a figure performing a significant action in a landscape has become my greatest challenge. I decided that timeless human responses to existence are a worthy subject: joy, frenzy, ecstasy, anger, meditation, fear, etc. – states that embody some elemental reactions to life.”

“Ron Kroutel investigates the single figure in dream-like circumstances, not all of them entirely pleasant as when the subject finds herself naked in a snow storm, or when a man in a dress shirt and slacks finds himself in mid-air, falling headlong into rustic watercourse," Thurmer says. “These figures in landscapes might represent the interior psychological experience of the isolated individual — perhaps undergoing estrangement and disaffection. For all the surprise in each image, there is a compelling familiarity present – perhaps the recognition of some underlying truth.”