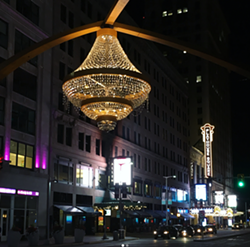 Photo via vickieun/Instagram
A Garfield Heights teenager behind several robberies in recent months (most notably one at Playhouse Square) has been apprehended and charged.

And he's been busy. The 17-year-old is accused of carrying out multiple robberies from March 4 to June 16.

According to the office of Cuyahoga County prosecutor Michael O'Malley, on June 6, the teen and an accomplice allegedly choked and punched a 23-year-old man downtown before swiping his wallet and fleeing on bikes.

Most recently, on June 16, the boy allegedly approached a woman in a Huron Road parking garage around 1:30 p.m., then shoved her to the ground before taking her handbag and, later, using her credit cards at Target.

He faces 36 counts against him, including aggravated robbery, identity theft and misuse of credit cards.

Although he is just 17 and currently being held at the Cuyahoga County Juvenile Detention Center, he will likely be tried as an adult.

"This kid was given multiple opportunities to correct his way of life and he's failed at every turn," O'Malley told Cleveland.com.

The boy is currently on probation stemming from a 2015 incident involving grand theft and a police chase, after he and three 14-year-olds robbed a pregnant woman at gunpoint in Valley View.