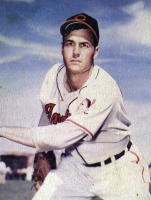 Gene Bearden pitched the last 1.2 innings of game six of the 1948 World Series, which happened only days after he won game three by shutting out the Braves. He won his 20th game that year in a one-game playoff and was the last man on the mound for the Indians when they won their last world championship. He was a rookie, by the way, and never came close to matching that 20-7, 167 ERA+ season.