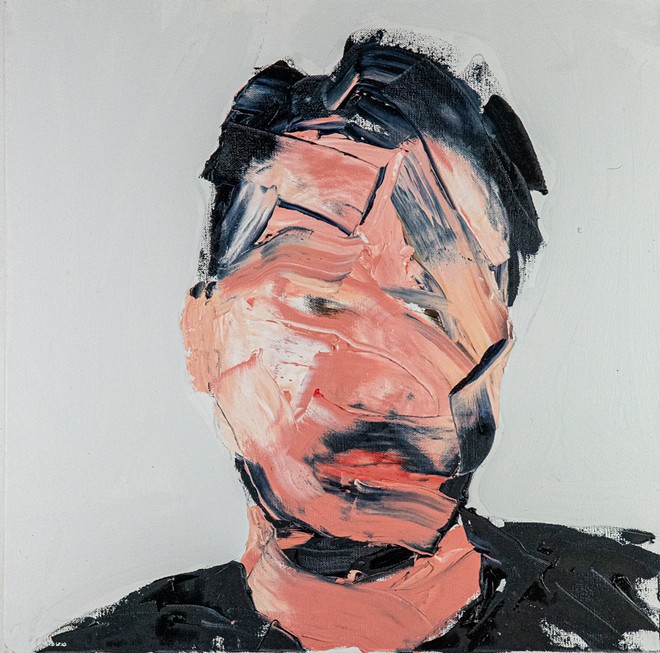 An exhibition titled "General Maintenance," referring to the need for some sort of aid, pacifier or crutch to get us through a life fraught with challenges mundane and complex, is a pretty appropriate way to start 2021. Which is a good reason to head to HEDGE Gallery next Friday, Jan 15 from 5 to 8 p.m. to see the latest work by Cleveland artist Justin Brennan.

“We all need something to get us by and maintain. Sometimes its drugs, alcohol, medication, therapy, etc," Brennan said. "For me, it is a few of these things and my art form, painting. These items were all I had, abused or needed before and especially during the pandemic. This body of work is the various stages I went through over the last two years. One of the ways I maintained.”

Brennan’s work in this exhibition will feature portraits of him as well as some of his loved ones and extends to more narrative, symbolistic and personal subject matter reflecting on mental health and addiction which are two issues many face amidst the many challenges presented by the pandemic.

The 44-year-old Lakewood native briefly studied Studio Art and Graphic Design at Kent State University and has always been interested in art but began to focus on it more seriously in 2005. Since then he has garnered the attention of the Cleveland art community.

Brennan makes art using a range of mediums: oil paint, oil stick, enamel, collage, latex and spray paint. His latest series began with an interest in pop art inspired portraits in 2019, but since COVID-19 altered our existence early in 2020, the work has pivoted focus towards sustenance and self-reflection.
There is a refreshing, controlled abandoned with his work which offers and abstract narrative along with a contemplative tilt towards observations of his surroundings and intense self-reflection.

His “Self Portrait #6” featured in this show is a confrontational, intimate inventory of the psyche of the artist. It is scarcely discernable as Brennan but he’s left enough visual clues to have the viewer guess who the image represents.

It as if he rendered himself realistically with copious application of paint then stripped and smeared away some of the detail distorting and morphing the portrait leaving a timid and somewhat morose depiction of a man on a journey towards self-discovery.

"Being in my head for all those months drove me to paint myself,” explained Brennan. “I usually paint from an anonymous portrait or figure. This body of work was very personal. I questioned myself and was forced to answer.”

There are many of his works which allow for heads and faces to be distorted and palled at times. In the picture "How Do You Like Your Eggs,” the subject confronts the viewer shirtless, sitting on a stool, a dog at his feet with a blackened face resembling an executioners mask.

There is something eerily complacent about the man and something somewhat absurd about this eccentric subject matter which draws the viewer in and begs for speculation. The painting is reduced to chaotic line work and seems a stream of conscious portrayal concerned with emotive dexterity and a move towards neo impressionistic tendencies.

“In this body of work none of the portraits featured are covered or masked like previous, just very abstracted or left blank,” said Brennan. “After being in my house for months I realized I could not mask or hide anymore. Although, features are not masked or hidden they are still not completely free.”

The piece “Detained” depicts a mailbox with the flag raised as if to indicate there is outgoing mail, a red cross and X in a tornado of furious color, brushwork and lines leaving the viewer with a feeling of chaos and anxiety. It is difficult to ignore some of the intuitive and imaginative reminiscence of the SAMO© work of graffiti artists, Jean-Michel Basquiat and Al Diaz. I asked Brennan if Basquiat was an influence.

“Yes, he is an influence,” conceded Brennan. “His work is primal and composed so perfectly amongst other reasons. I rely on composition and controlled chaos, at least I try to.”

Justin’s work is included in private collections internationally and has been featured in CAN Journal, The Cleveland Plain Dealer, Scene Magazine, The Sandusky Register and Canvas Magazine. Justin continues to exhibit in art fairs, solo, two-person and juried shows and throughout the country. He is represented by HEDGE Gallery located in West 78th Street Studios, where his studio is also located.