Sam Allard / Scene
Genital streets signs have been taking over Tremont for the past several weeks. Though wind and/or God-fearing concerned citizens have removed some of the handiest of this local prankster's handiwork, "College and Dong" is an intersection that still exists, as of Tuesday evening.

Dong signage has appeared elsewhere in Tremont in recent days, which indicates that this genitally inclined sign-making rapscallion may have multiple copies on hand and may be prepared to go the distance — that is, to keep replenishing destroyed or dismantled street signs until the pandemic is over and he/she/they will presumably have something more urgent with which to occupy their time.

As recently as this weekend, both "Weiner" and "Beaver" street signs adorned the intersections of Kenilworth and W. 11th and Fairfield and W. 10th, respectively. (They are both now gone.)

Secured with blue painter's tape, the signs are extremely low-tech, (and also harmless, not even rising to the level of true vandalism). But the bright blue background and white lettering are enough to fool at first-glance. 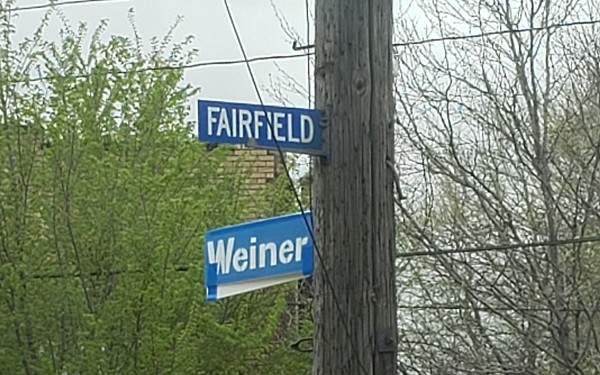