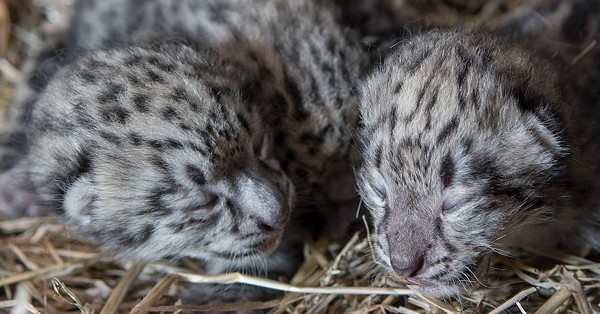 The Cleveland Metroparks Zoo is responsible for warming all of our cold, dead hearts with today's announcement of the birth of three snow leopard cubs.

Two adorable males and one painfully cute female were born to mom, Sombra and dad, Amga on April 22. The trio join an older sibling, Sameera who was born in 2016.

All of the cubs are continuing to bond closely with their momma leopard behind the scenes before they will be visible to the public in the Primate, Cats & Aquatics building.

Later this summer they will move to the new Asian Highlands habitat along with additional snow leopards, Amga and Sameera, as well as an Amur leopard, red pandas and takin, a new species coming to Cleveland Metroparks Zoo.

Scientists estimate less than 7,000 snow leopards remain in the remote mountains of central Asia, making the species endangered. Cleveland Metroparks Zoo has worked with the conservation organization Snow Leopard Trust since 1998 and is committed to securing a future for the snow leopard population.

Check out this adorable video below: