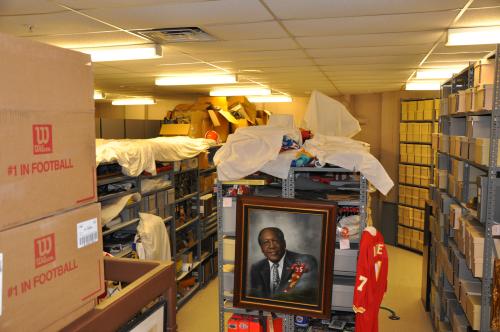 About halfway through the Pro Football Hall of Fame’s layout — just after the exhibit that pays homage to the first century of the game and just before the solemn, reverential space that houses the inductees’ bronze busts — there’s a room. It contains no memorabilia, and it’s a little antiseptic compared to every other room in the HOF. In fact, it feels a little like a classroom: white walls, rows of chairs facing the front, a long table.

Functionally, that’s exactly what it is: a classroom.

Once an hour, two older men with white hair and white gloves unlock a trunk and haul out a handful of the hall’s most unusual objects. Between their appearance and generally jovial nature, the guys come off like a pair of pigskin-obsessed Santa Clauses.

Today, they bring out a heating coil that was once buried beneath the turf at Lambeau Field. They explain that it was condensation from the overheated and busted coils — not precipitation — that caused the perilous conditions of the 1967 championship game, commonly known as the Ice Bowl. The Santas retrieve a copy of one of the earliest contracts signed by a professional football coach (Ben E. Clark in 1910) and share his meager compensation: $2 a week plus a jersey. There’s a T-joint of an old goalpost from Municipal Stadium, back when they were on the goal line and any pass from inside the end zone that hit one and fell incomplete resulted in a safety.