Mate-swappers sue for the right to bare arms -- and everything else. 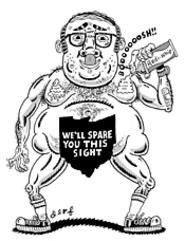 Overt displays of sexuality make Attorney General John Ashcroft uncomfortable. Look no further than his decision to drape a curtain over the breast-baring Spirit of Justice statue that was a backdrop for his press conferences. So he can't be happy about being named a defendant in a lawsuit filed by an Ohio-based chain of swingers magazines.

The dispute began long before Ashcroft's puritanical tenure. It involves a well-meaning law meant to stamp out child pornography, but which also threatens the vitality of Connection Distributing Co., a Cleveland publisher of magazines aimed at mate-swapping adults.

But the record-keeping provision also applies to middle-aged adults, whose sagging bodies and wrinkled features prove they're well beyond the age of consent.

"You can be gray-haired with a beard, and you still have to comply with the law," says Robert McGinley, president of the Lifestyles Organization, a California business that caters to what he calls "play couples."

That's where Connection Distributing comes in. The readership for its personal-ad-heavy magazines -- with such titles as Amateurs XXX-Posed and Cocoa 'N Creme -- skews old. The same is true of swingers in general, according to McGinley.

"The late 30s, 40s, and early 50s make up the great majority of people involved in swinging, by far," McGinley says. "Later on, once people's marriages and families are set, the couple has more of a tendency to look for other things and to look outside erotically."

Connection's readership also skews paranoid. Most couples who place ads with photos ask that their faces be blocked out, fearing their hobby won't be well received by the "straights" with whom they live and work.

Their fears aren't entirely unfounded. McGinley, an aeronautical engineer, lost his security clearance after answering an ad placed by an Air Force swinger. The managing editor of Connection Magazines uses an assumed name -- "Patti Thomas" -- to protect her husband's job.

So classified advertisers reacted with predictable fury in 1995 when Connection told them they would have to submit photocopies of their driver's licenses, which would be kept on file for inspection by government agents.

"ID information is very confidential and private," wrote one middle-aged couple in response to a Connection survey. "We don't think it should be shared with anyone."

Another middle-aged couple said they wouldn't submit IDs even if government officials were the only ones to see them. "Work for state of Ohio," they wrote.

"An explicit photograph carries information about the person or that couple that mere words cannot portray," McGinley says. "It says, 'This is us. This is what we look like. This is who we are. And very clearly, this is what we are interested in.'"

After the ID regulation went into effect, Connection saw an immediate drop in advertising. The company requested IDs from 466 people and got only 30 to comply.

With the ID requirement threatening to drive it out of business, Connection filed suit against the Justice Department, claiming that the law violated swingers' freedom of speech.

The company argued that it already had procedures to guard against publishing photos of minors -- namely, eyeballing photos to see that someone looks more like 50 than 17.

The Justice Department countered with the expertise of Dr. Francis Michael Anthony of Children's Hospital Medical Center in Cincinnati. "I believe that there were three pictures where, in my medical opinion, the people could be under the age of 18," he testified after reviewing six Connection magazines published in 1994. He cited such factors as breast development, acne, and the absence of pubic hair. Yet even Anthony conceded that the vast majority of photographs were of people over 18, and that he didn't need a photo ID to confirm this.

In 2000, a U.S. District Court granted summary judgment to the Justice Department. The case looked dead. But several months ago, the Sixth Circuit Court of Appeals reversed the decision, citing a slew of recent First Amendment cases in which the plaintiffs were as varied as Playboy and the Jehovah's Witnesses.

Now the case heads back to trial in District Court, and Connection will get one more chance to defend the rights of mate-swappers.

Perhaps the dispute could have been resolved if the ID law were modeled after the rule requiring tobacco retailers to card anyone who looks under age 27. It would guard against would-be Traci Lordses while preserving the anonymity of middle-aged customers.

But the government rarely displays such Solomonic wisdom. Instead, if the Justice Department gets its way, Ashcroft will throw a wet blanket over swingers, the same way he drew a curtain around the Spirit of Justice.