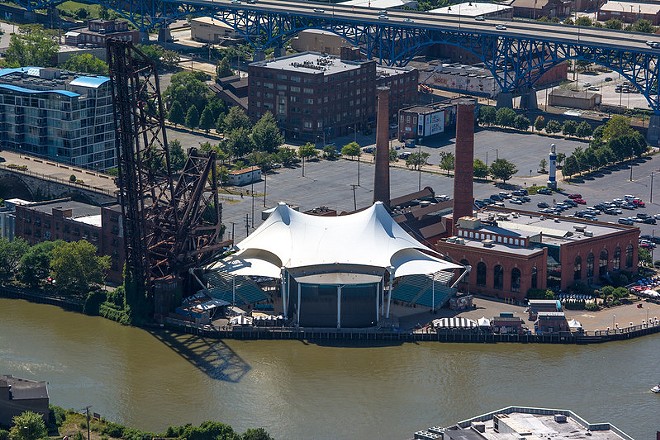 Bryan Zinser hadn't really been out of the house since November, except to see his 4-year-old son in the hospital when the boy had open-heart surgery late last year. But this past Sunday afternoon, with the sun finally gracing the sky, the Akron resident headed up to downtown Cleveland with a buddy to shoot some drone video around the Cuyahoga River.

Filming on the east bank across from Nautica around 3 p.m., he saw and heard something splashing in the water.

"I wasn't sure what it was at first so I walked over," he said. "When I realized it was a person, I was like holy crap. I looked around but there was nothing to extend to him. I didn't want to get in the water at all."

But then the man went under.

A woman he thinks was with the man in the river appeared in shock, and only Zinser's friend and two other strangers were around.

"I turned to the person next to me and said I'm going to go in, but I'm gonna need your help if he wakes up. I was scared he was going to take me down with him."

The man was underwater, so Zinser just guessed where he was and jumped and started reaching around.

"He was only like a body's length into the river, and when I grabbed him he was struggling and started to breathe in water. That's when he passed out. There was zero time," Zinser said.

The short length back to the river's edge felt anything but. The water was frigid. Zinser was gassed. He was trying to pull the man with him and get him in a position where the others could grab him.

"There wasn't a good angle. It felt like a full minute of struggling, but it was probably only 30 seconds. My strength was zapped. I was just yelling to him up, because this wasn't done — he needed help and he's probably not breathing."

"I just started yelling to push on his chest, and I pushed the girl he was with towards his face and said you have to breathe for him. The bystanders were pushing on his chest to get things moving and yelling for anyone who could hear them to help."

He started breathing, and a nurse who happened to hear the cries for help arrived and got him in the rescue position. He recovered a bit before the police and EMS showed up.

"They were asking him his age and he knew his name," he said. "He was awake. It was so cold, and with him passed out for a minute, hopefully it wasn't too bad."

A public safety spokesperson didn't immediately know where the man was treated.