Making the world a better place and getting away from Grandma. 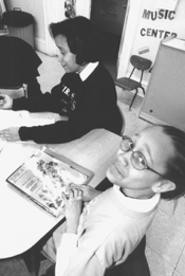 Walter Novak
Camping survivors Denise Smith and her daughter Adrienne.
Girl Scout leader Victoria Williams is a brave and resourceful outdoorswoman. When a bat flew in her tent, she bravely led her troop in a series of bloodcurdling screams. Then she resourcefully beat a path to the nearest cabin, where they all slept soundly on the bat-free floor.

"I've had enough camping," she sighs, none-too-wistfully recalling her first overnighter. (After all, she slept in a tent and a cabin, all in one night!) "But don't tell my girls that. Some of them might wanna go camping again, and I'll have to get out of that mode."

A former Girl Scout herself, Williams has fond memories of her own leader, Roselyn Razor, who made up in kindness what she lacked in wilderness skills. Back in the "olden days," as the girls in Williams's Cadet troop teasingly call the 1960s, they did a lot of crafts and not much camping.

Also in the olden days, African American Girl Scouts were few and far between. But at the time, Williams, who belonged to an all-black troop, didn't really notice. She was too busy worrying about not getting her butt tanned by her grandmother -- a strict, churchgoing woman whose house rule was "When those street lights come on, you had better be home. Not coming, not fitting to come, not "I was gonna come.' You better be in that house!"

"I was pretty much a sheltered kid," Williams says, noting that when she was raising her own sons, she was often visited by the voice of Granny, the former superintendent of Sunday school at Antioch Baptist Church on Cedar Avenue.

"When I was a Girl Scout, it was just right there at my church. I knew it was a bigger organization, but I didn't see other troops, and I didn't know whether they were black or white."

Cheryl Goggans, who leads the Lake Erie Girl Scout Council, was more in tune with the times during her cookie-selling years. When her mom dropped her off at resident camp, she was sucked up in a sea of white faces. The only African American girl there, she had to spend way too much time letting the other girls touch her hair and overhear way too many discussions on how nice the little black kid was. All she could do was roll her eyes and wait for it to be over.

"Nobody was mean to me," she says. "But I didn't always feel welcome."

Besides learning how to dog paddle, she learned to always bring a friend to camp, so she wasn't The Only One. She had gotten wise in grade school, when her family moved to the Glenville neighborhood, on a side street off of St. Clair Avenue. Since they were the first black family on the street, she suddenly had no one to play with.

"When you're in the minority, even living in a segregated neighborhood, you understand that the world is white," she says. "So I didn't go through some of the same shock that some of [the white Girl Scouts] went through, because their discovery was "Oh, gosh, the world's not all white.'"

Smitten with scouting ever since her best friend showed up in her smart new Brownie uniform, Goggans took an administrative job with Girl Scouts in the 1970s, after she graduated from college. Stuck in The Only One slot again, she soon tired of hearing tidy proverbs about how African Americans don't like to join groups and don't volunteer, because they're too needy themselves.

At the time, the only minority outreach was a program that temporarily brought Girl Scouts to the housing projects. After a two-month run, the grants dried up and the leaders moved on, so the already-neglected kids felt especially abandoned and betrayed.

Feeling rather confined, Goggans left Scouts for a while to work with at-risk children in a Hough neighborhood center, then returned to lead the Lake Erie Council in 1994. The old guard had left, and in its place she found a more "with it" group of volunteers, willing to actually use the cobweb-collecting materials they had on topics like diversity and violence-free dating. Since then, minority membership in Cleveland-area Girl Scouts has risen 77 percent. And nationally, minority membership has increased from the eye-rolling, hair-touched few to one-third of the entire green-wearin' masses.

"We had to move away from "Gee, here are the ladies running down to the inner city, helping those poor souls' to "There's a lot to learn and celebrate in any community, and we need to have a relationship with that community,'" Goggans says. "That meant that we had to do things over the long haul and have a cultural shift in thinking."

Back in Goggans's old neighborhood, three relatively new troops thrive at New Life Community Center, a clapboard house overflowing with both children and gospel music. In a room with construction paper butterflies, the girls in Denise Smith's Junior troop squeeze themselves into preschool-sized chairs and chat about their latest camping expedition, which was more Call of the Marshmallows than Call of the Wild.

They made s'mores and told ghost stories. "In the bathroom, they spelled "murder' backwards," confides Adrienne, Smith's daughter. "We were scared. Somebody told a really scary story about this man. Parts of his body would pop like a balloon. My mother had to come upstairs and sleep with us."

The bacon was burnt, notes food-critic-in-training Brittany, a fifth-grader with impish braids.

"They should have us cook breakfast in the morning," she opines. "We'd make eggs, French toast, and sausage." The eager kid in the front row, even though the desks are arranged in a circle, Brittany recently earned the African American history badge, studying "certain people who do certain things in history" and writing a report on "I forgot her name."

The high drama at camp was provided by the insufferable Brownies, who tried to steal all the candy in the scavenger hunt.

Williams, whose Cadets also meet at New Life, says that when she was a Girl Scout, her troop didn't do anything particularly earth-shattering. But when she got older, she decided she just had to find her leader, Mrs. Razor, and thank her.

"Although she was over a group of us, she just made me feel special," says Williams, whose mother died when she was five. "I felt like, hey, I was the one. I'm sure she did that to everyone. She just had that way about her. But it meant a lot to me."

After a few years of fruitless searching, the planets aligned, and Williams ran into Razor's daughter, Vivian, at a bowling party.

"The first thing I said was "How's your mom? Gimme her phone number,'" Williams recalls. "I was gonna find her. I wanted to let her know that she was a mentor to me, she was a role model. That all her time and effort, it wasn't in vain. I talked to her, and she said she needed to hear that."

As motherly as ever, Razor even entertained Williams's Cadet troop. "She told them about me and how I was as a kid," says Williams. "How I liked to talk too much and stuff like that. I wasn't bad. I was kind of mischievous."

A glorified paper pusher at a bank (her words), Williams lives at 93rd and Kinsman, "right smack in the middle of Drug City," where a lot of kids don't have churchgoing grandmothers looking out for them. And even when they do, being stuck in the house because the world is bad is no fun. For Williams, hanging around Mrs. Razor was the one fun thing she could count on.

"When you're a child, you're supposed to have childhood memories," she says. "If you don't have any memories, how can you pass the memories on to your kids?"

Generous with her "praise the Lord"s, Williams praises the Lord for the Boy Scout leaders who spent time with her sons when she was a working mother. And for Rick and Tobey Gillespie-Mobley, her pastors at the adjacent New Life Church, who go all out for the girls.

"Ask Pastor Rick about last weekend and how he lugged all our cookies in," she enthuses. "We drive up with the van, and Rick rolls up with a dolly and helps us load those cookies into church. No ifs, ands, or buts. And Pastor Tobey helped me lug those extra cookies up to the second floor. There wasn't any room for them downstairs, so we stored them in her office.

"Their work is not just behind the pulpit. It's not just preach the word and that's it, they figure their job is done. They lead."

For his dolly duty, the irreplaceable Pastor Rick was rewarded with three boxes of Girl Scout cookies.

"They were the Do-Si-Dos. I already opened one, and I've had to share one," he says. The Gillespie-Mobleys also bought 14 boxes. "Every year, we have a discussion about how many boxes we need to order. My wife and I are the first ones the kids run up and ask."

Boxes of Thin Mints and Samoas also line the walls of Cheryl Goggans's office. Her daughter, Candace, a Cadet, is a crack cookie seller and helpful, in the sense that she's quick to "advise" her leaders when they treat the girls like babies or start doing too many projects like gluing macaroni on construction paper.

Candace has learned well from her mother, who didn't burn the bacon when she took the troop camping. Instead, she let the girls burn it themselves, along with the pancakes and fried chicken they decided to cook over an open flame.

"I'm just glad they didn't cook a pound cake out there," Goggans says, noting that she had to bite her lip when they planned the menu. The cake might have looked like Mt. Rushmore in a rainstorm, but it would have been one heck of a memory.