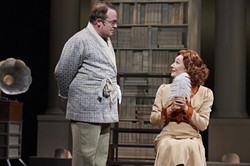 One of the pleasures of seeing a classic Lerner and Loewe musical such as My Fair Lady is in seeing how it can be restaged, or even reimagined, some 60 years after it opened on Broadway. In this Great Lakes Theater production, directed by Victoria Bussert, very few liberties are taken with the material. And that’s a good thing, since the material is so damn good all by itself.

Of course, back in the day other Broadway teams took a run at musicalizing George Bernard Shaw’s story of Pygmalion—including Rogers and Hammerstein. Richard and Oscar worked on it for more than a year before giving up, What threw them was the lack of a strong romantic through line, since the stern taskmaster, phonetician Henry Higgins, and the poor flower girl Eliza Doolittle never seem to really hit it off.

In this production, Eliza is played by Jillian Kates, and she handles her chores with professional aplomb, even though the “r” sound is barely noticeable in her tender rendition of “Wouldn’t It Be Loverly.” Still, she is a properly rough and tumble gal as the early Eliza, joking and dancing with the other denizens of the gutter. And she shows some real spirit in “Just You Wait,” her rant against the dominating presence of ‘enry ‘iggins. When Eliza is transformed as a proper lady, Kates shows off her powerful singing voice in the amusingly repetitive “I Could Have Danced All Night.” But once this Eliza gets her rap together, her character becomes a bit too flat, the spirit refined out of her.

As Higgins, Tom Ford brings a tense, rapid-fire, no-nonsense approach to a role that was made famous by Cyril Richard’s talk-singing profundity and slow burn. Ford’s take is quite amusing throughout, especially in “I’m An Ordinary Man,” but it sacrifices something in the connection that is supposed to grow between Higgins and Eliza. Since Ford’s machine-gun nastiness seems reflexive rather than inspired by the specific presence of the Cockney lass, it makes his eventual softening towards her less personal, and thus less meaningful, than it might otherwise be.

There are particular delights in the smaller roles. M.A. Taylor has never been better than he is as Eliza’s scoundrel father Alfred P. Doolittle. His takes on “With a Little Bit of Luck” and “Get Me to the Church on Time,” augmented by energetic dance numbers choreographed by Gregory Daniels, are little gems. And Colton Ryan as Freddy loads plenty of yearning into “On the Street Where You Live,” making his reprise laugh-out-loud funny. And Laura Perrotta manages to cadge some laughs from the rather drab role of Mrs. Higgins, Henry’s mom.

The scenic design by Jeff Herrmann is to drool for, with simple rotating panels indicating the locations and a virtually monochromatic color scheme of whites and off-whites giving the production a lush feel. The orchestra under the direction of Joel Mercier is spot on.

My Fair Lady is a treasure and this production does it full justice.