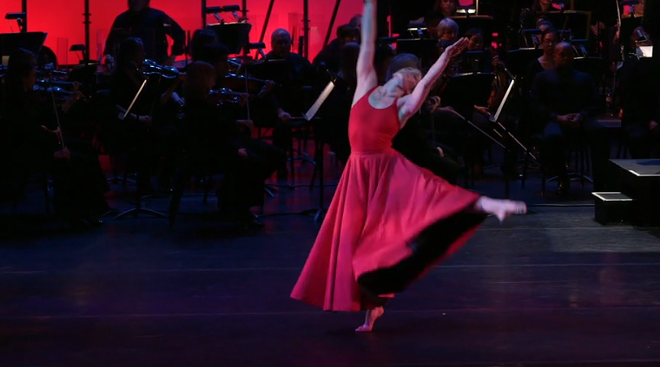 The indoor-outdoor Alma Theatre was seasonally comfortable in mid-July with almost all of the seats full on opening night of GroundWorks DanceTheater’s 14th annual performance at the hilly, tree-covered Cain Park. What the participants didn’t know was that the almost always proficient Groundworks Dance Theater was about to let loose with what assuredly was one their finest performances.

The exciting evening consisted of two pieces, “Hex,” in its world premiere and “Carmina Burana,” which was originally mounted with the Akron Symphony Orchestra this past May. “Hex” is the work of Adam Barruch. The latter was choreographed by GroundWorks Artistic director, David Shimotakahara.

Adam Barruch is multi-talented and proficient. He started his show business career at a young age, appearing on Broadway, film and television as a child. After attending LaGuardia High School for Music, Art and Performing Arts, he attended Julliard. He has since been on a path to stardom, receiving numerous awards and residencies for his choreography.

As evidenced in “Hex,” Barruch has an affinity for gestural movement, challenging the body to fully express itself. His style may be explained as “physical storytelling.” Each gesture, facial expression, body position tells a tale. Besides stage dancing, he has recently worked in film and is involved in a new physical theater production of Stephen Sondheim’s Sweeney Todd: The Demon Barber of Fleet Street.

As the lights come up on “Hex,” a large book is seated on a table, center stage. It soon becomes obvious that the book, and its message, would motivate the choreography. The tome is a “grimoire,” a book of magic spells or invocations, sources of universal power.

As the dancers “read” the book the tales develop through “kinetic gestures,” hand, face and body movements, which carry the tale. As Barruch explains, the actions are “multi-dimensional use of the dancer’s upper body and arms, conveying a physical language of rich complexity and emotionality.”

The effect of the powerful and controlled movements is attention grabbing and holding. The choreographer has invented a new vocabulary of dance with his concept.

Moving to electronic sounds, the dancers are in sinc with the tones, creating beautiful stage pictures. They are aided by Dennis Dugan’s lighting which creates numerous “other dancers” by angling the instruments so that an abundance of shadows fill the intimate space.

Far-eastern movements join with traditional dance, to bring out the power of the book.

“Carmina Burana” is noted as “Carl Orff’s scenic cantata.” The music is inspiring and creates a multiplicity of emotional responses.

Anyone who experiences David Shimotakahara’s choreographic interpretation of the Orff sounds will not be able to hear the music without seeing it visually. It’s like Shimotakahara tapped into an untapped spring and makes it seem, much like Tchaikovsky’s “Romeo and Juliet” and “Swan Lake,” that the sounds of “Carmina Burana” were meant for the purpose of dance!

Shimotakahara’s program notes state, “I have framed this production from the perspective of one who is looking back at life’s experience. How each of us looking back, must come to terms with our limitations in the face of all that life has to offer, in order to appreciate our own experience and recapture its wonder.”

Based on 24 poems and dramatic texts from the medieval collection, “Carmina Burana,” means “Secular songs for singers and choruses to be sung together with instruments and magic images, the driving sounds are filled with primal and ethereal drama.”

Spontaneous applause erupted throughout the piece. A segment danced on stilts, a male trio, a quartet of females, a compelling segment where the eight dancers blended as one, a lovely pas de deux, and a glorious ending with whirling dervish interludes, all were recognized. Janet Bolick’s black and red costumes added much to the performance.

Just when we were getting used to the newly configured GroundWorks DanceTheater, Artistic Director David Shimotakahara has once again adjusted the company. Company regulars, the exquisite and talented Felise Bagley and long-time dancer Damon Highfield performed. Lauren Garson and Michael Marquez, who added their vast talents to the company last year, were also on hand. Added for this performance were multi-proficient Stephanie Terasaki, a Julliard School grad, as well as Conner Bormann and Alex Soulliere, Julliard attendees, and Lucie Baker, a Julliard grad. Missing was Annika Sheaff, who is on maternity leave.

The ”newbies” impressed. If Shimotakahara is looking to add a permanent male dancer, Soulliere should get a phone call. He dances with artistic attitude, control of his space, and moves with authority and ability. Terasaki was also in a class of her own.