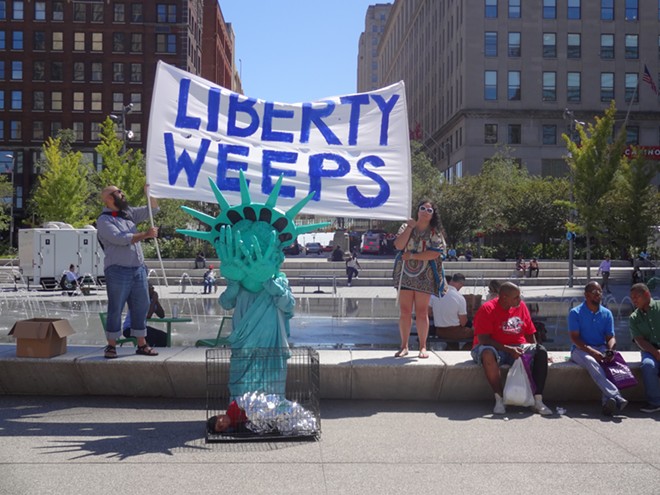 Sam Allard / Scene
More than 60 Ohio organizations and 330 individuals have signed on to a letter calling on Gov. Mike DeWine and state officials to dramatically reduce the number of inmates in Ohio's prisons and to end deportation arrests and immigration courts during the COVID-19 outbreak.

"Many people living together in close quarters, often in dirty conditions without decent medical care, is a recipe for rapidly spreading COVID-19," the letter reads. "Outbreaks in prisons would be extremely difficult for our already overtaxed medical community and government agencies to handle."

In a statewide conference call Tuesday, representatives from the Ohio immigrant rights community provided testimony about the moral and medical urgency of reducing prison populations across Ohio, including immigrants in detention.

Several hundred immigrants currently reside at state facilities in Butler, Morrow, Geauga and Seneca counties. Virtually all of them are in civil, not criminal, detention. No data has been provided about how many of them have been tested for COVID-19, but given the scarcity of testing components at public and private hospitals across the state, it's unlikely that detainees are being made a priority.

Houleye Thiam, an activist in Ohio's Mauritanian community, noted that many immigrant detainees have homes and families with whom they'd be able to shelter in the state, and that they could be safely monitored via ankle bracelet or regular reporting. Keeping them in crowded, under-resourced facilities with limited access to soap and sanitizer, however, could spell disaster.

Dr. Laura Chambers-Kersh, a family doctor in Beaver Creek, confirmed the dangers. She said that crowded U.S. immigration facilities represent the "perfect arrangement" for an explosion of COVID-19 cases and that without an effort to reduce the network of transmission, an effort that necessarily would include releasing large numbers of detainees, there was a "high probability of suffering and death."

Chambers-Kersh said on the call that she'd worked in Liberia during the Ebola outbreak and that stopping the spread of that disease required profound changes in behavior by individuals and the government.

"Releasing immigrants from detention centers is a critical change to make," she said.

When asked by a reporter if the state had the authority to release prisoners en masse, Lynne Tramonte, of the Ohio Immigrant Alliance, responded that the state could "find the authority, like they did when they canceled the primary."

The message was that Ohio's prisons and immigrant detention facilities could become a public health nightmare and that the state bore the same responsibility for the health of its prisoners — human beings — as it did for the health of other vulnerable populations.

The ACLU of Ohio is also circulating a petition calling on Gov. Mike DeWine to immediately create and disseminate a plan of action to prevent and manage the spread of COVID-19 for Ohio’s incarcerated population.