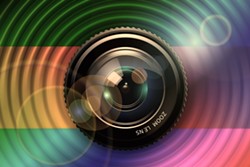 Photo via Creative Commons
Hackers took control of a local printing shop owner's internet protocol (IP) security camera in Lorain County earlier this month. For five days the owner, who identified himself only as Joe to News 5 Cleveland, noticed the camera moving on its own.

One of the employees started to hear voices coming from the camera on the fifth day and went to notify Joe. The voices on the other end started shouting profanities and threatening Joe and his employees.

The hackers harassing Joe and his employees knew their names and the name of the store they all worked in. One of the employees contacted authorities and when dialing 911, a voice from the camera said, “Go ahead, call the police. They don’t scare us.”

In addition to calling the police, Joe contacted federal instigators who told him how to change his IP address and are reviewing the video Joe recorded of the hacked camera.

Joe told News 5 Cleveland that he wanted to speak out about his incident to let others, who also rely on IP cameras, "to be aware of just how vulnerable their system can be."