Has Your Company Announced 'Preparations' Ahead of the Brelo Verdict? 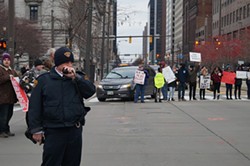 SAM ALLARD / SCENE
If you scan even the most surface-level social media commenting or television newscasts these days, you're sure to run into all sorts of paranoia about rampant destruction that lies ahead. The city has been in APB mode, alerting residents across all wards that violence will not be tolerated — even as Cleveland's protesters have undertaken nothing more aggressive than acts of civil disobedience since Nov. 22.

The concern, broadcasted from City Hall and from your brother-in-law's Facebook page, is that people from out of town will scorch this mufukin city.

So we're interested in hearing from employers and employees — we'll leave names out of it if need be — about what sort of "emergency plans" are in place for the near future. CMSD, for instance, has already announced that students may stay home if their families feel that's the safer option. Without being given specifics, we've been told that the Cleveland Public Library has "an emergency plan" in place. Churches across town are set to fling open their doors as soon as Judge John O'Donnell drops the word.

It's tough to shake the sense that, with all of this circling-the-wagons business, the die was cast long ago and O'Donnell's inevitable verdict is just a formality at this point.

The delay from the courthouse is baffling (though we've written about bench trial timelines), and one consequence is that the skepticism and fear-mongering has a greater chance to grow into genuine panic and anger at forces as-yet-unseen. (Note to Case PoliSci students: There's a free thesis for ya.)

Shoot a line to [email protected] if your place of work is sweating the The Verdict.