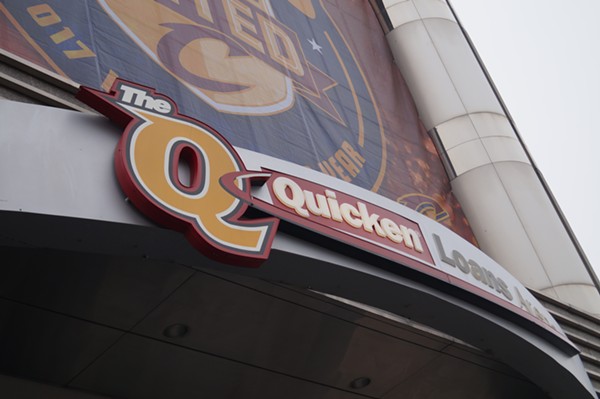 After more than 30 public comments, passionately delineating familiar notes of opposition and support, Budish took to the podium to present a doomsday scenario in which the county was all but guaranteed to lose the Cavaliers’ franchise and the arena itself if council did not authorize the deal.

For background: The so-called Q Transformation has an advertised all-in price of $140 million, and has been billed — and continues to be billed, by Budish and Cleveland.com — as an even split between the Cavs and the public. But as has been reported extensively, the total cost of the project, after interest and the creation of a rainy day fund, will be ~$282 million, of which the public will pay an estimated $160 million.

The largest share of those funds (~$88 million) will be borne by the city, via an admissions tax on ticketed events at the Q from 2024-2034. The reason why it won’t be activated until 2024 is because until 2023, this portion of the admissions tax will be used to pay off existing Gateway bonds — from the nineties.

But the county, as the public author of the deal — it is the entity taking out the bonds — is the first to deliberate on the controversial issue in a public forum. The county’s financial contribution will be $16 million from a pot of unused dollars intended for the convention center and Cleveland Hilton Downtown hotel. Though the Cavs and their elected shills have repeated that no new taxes will be created and that the city’s and county’s general funds will not be affected, councilman Jack Schron said yesterday that the $16 million from the convention reserve really ought to be seen as general fund dollars.

It's no secret that this issue has sparked wide and heated debate. The Cavaliers — and their pals from the Greater Cleveland Partnership, to say nothing of their muscle from the construction trades — are explicitly seizing on the momentum generated by the Cavaliers’ championship. They argue that Cleveland is hot right now, and the region can ill afford to take its foot off the gas pedal. The Cavs have said that this is an investment in the future, in Cleveland’s (that is, the Q’s) ability to stay competitive, “not this year, or next year, but in the short-term years ahead.”

Meanwhile, the opposition, led by Greater Cleveland Congregations, contend that the gap between the haves and have-nots is only widening in Cleveland. They can’t make sense of the public’s continual investment in projects for which they see so little direct return. (More on this shortly.) Far from opposing the Cavs, or even the renovation itself, the GCC has proposed a dollar-for-dollar match in a community equity fund, to support things that the region’s communities actually need: mental health crisis centers, workforce development and training, capital projects in distressed neighborhoods.

But back to Budish:

He may as well have been wearing shackles and a spiked leather collar as he wailed in the direction of council a message harvested from auto commercials — the Q is an economic engine, motor (and presumably its chassis and foot-activated liftgate to boot). WE ARE HAPPY PARTNERS, Budish squealed (Writer's note: This is paraphrasing subtext), AND AS SUCH WE MUST DO EVERYTHING THE CAVS SAY! In fact, his plea began on a nuptial note. He was presenting the plan, to council, he said:

“Because I know you share my unwavering commitment to all the residents of Cuyahoga County to create the economic environment necessary to support and sustain all of us in good times and in bad, for today and tomorrow.”

For the Orwell scholars in the audience, it was almost second nature to substitute “Cavaliers” and “corporate power” whenever Budish uttered “all of us” or “all of Cuyahoga County.”

But Budish’s strenuous ask was premised on two ideas, he said. The first was that the Q was a “critical economic and jobs generator for our entire region.” Budish said that the Q employed 2,300 people who “live in our neighborhoods and shop in our grocery stores.” (In fact, as the Cavs’ Len Komoroski stated in his presentation later, only 75 percent of the Q's employees live in Cuyahoga County, to say nothing of Cleveland.) Budish pimped the promised NBA All-Star week as a coveted event that brings “money and notoriety” to the host city.

The second premise — a craven one indeed — is that we “stand a very good chance of losing the Cavs and the Q and these jobs at the end of the Cavs’ lease if we don’t make this deal now. I’m not being an alarmist — this is the reality,” Budish, as willing hostage, declared. He cited the Cavs’ own talking points about the average lifespan of NBA stadiums and market conditions over which he apologized he had no control. Budish had not one iota of doubt, though, he said, that at the end of the Cavs’ current lease, they would demand a new arena (in the $600 million - $1 billion range) and would jump ship if they didn’t get it. It was here the County Executive began to tremble.

“There is no way we could come up with $1 billion without a huge tax increase,” he said. “If the Cavs leave, we’re likely also to lose the Q. That’s because we can’t maintain the Q without an anchor tenant…. To me, the key is the seven-year lease extension. We lock our championship Cavaliers into Cleveland for an additional seven years from 2027 to 2034. This enables us to extend the useful life of the Q to 40 years, which is unprecedented!”

Budish invited council to “look no further than the Browns and their move to Baltimore” as a likely outcome if the county did not submit. “Teams will move, especially out of a mid-market cities,” Budish said. “And by the way, Baltimore’s stadium was paid for almost entirely by public funds.”

Returning to the bogus $70-million figure, Budish said that the cost of keeping the Cavaliers for seven additional years would be a mere $10 million per year. Compared to a theoretical $800-million brand-new stadium with a theoretical life of 20 years, it should be a no-brainer. Right?