Help Wanted: The next generation of nannies for the super-rich 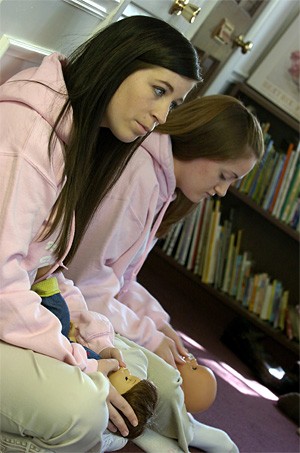 Walter Novak
At the English Nanny & Governess School, they're finding it hard to recruit workers for the next generation of Ivy League child care.

Sheilagh Roth's flower-scented office seems to match her Easter-green suit and Angela Lansbury accent. Her secretary serves tea and biscuits on a formal silver set. Under Roth's prim and watchful gaze, you fight to keep every crumb from escaping to the immaculate floor.

She's the head of the English Nanny & Governess School, a stubbornly quaint institution nestled in two white cottages in Chagrin Falls. While most moms hire the 14-year-old next door to watch the kids and monitor Xbox time, Roth is breeding a newer strain of meticulously trained Mary Poppinses for the private-jet set.

For about $7,000, students enrolled in her three-month course learn the finer arts of child care — everything from "creative play" to sewing. There are lessons in etiquette and trips to the stables. Nannies learn how to tour a child through a natural-history museum and what toys to pack for a week on the yacht. These are the tools required for service in a world of chauffeurs, bodyguards, and Easter egg hunts on the White House lawn.

"You really have no idea," says 28-year-old graduate Drew Dawson.

He helps run a mansion in Greenwich, Connecticut, that boasts a staff of cooks, housekeepers, and babysitters. His job is to help educate three young kids — meeting with their teachers, scheduling their music lessons and baseball practices, and throwing American Idol talent shows for the neighborhood. In his spare time, he writes curriculums for other families, overseeing their nannies after school. For more than $60,000 a year, he's willing to ignore the assumptions that he's a gay Cinderella in drag.

"My two passions are traveling and working with children," he says. "I get to do both with this job."

Margaret Cobble, a nanny who served three wealthy families before retiring, recalls cruising up the coast of Alaska on a private yacht and being chauffeured around England by the Queen's former driver. Susan Veale, who graduated from the nanny school seven years ago, has traveled on private jets, and once took scuba-diving lessons so that she could swim with her charges at their second home in the Bahamas.

"It's wonderful to be exposed to those different areas," Veale says. "But you're still working."

If it sounds like the Buckingham Palace of babysitting, it is. Roth's school was founded in 1984, when the word nanny still evoked images of a white-smocked matron reading nursery rhymes to her charges. Those were the days before yuppies began referring to babysitters as nannies, before ABC based a hit show on a woman who disciplines other people's problem children. Back then, a nanny who served tea and biscuits seemed the perfect accessory for the high-powered career mom.

The idea caught on quickly among New York hedge-fund managers and divorced Arkansas tycoons, who bought Roth's assurances that "the professional nanny or governess puts a child on a track for Yale or Harvard." She's never had to advertise for customers, and when she started, she had 20 students per class. Graduates are guaranteed jobs ranging from $26,000 to $100,000 a year, plus health insurance and room and board.

Of course, it's not all about the cash. Elizabeth Saunders, a 23-year-old who's only a few weeks into her first job as a professional nanny, spends her days chasing after three children under the age of six. When their dad is out of town, she doesn't finish work until 8 p.m. She's happy, but exhausted.

"This job is literally the most demanding job I've ever had," she says.

Darcy Csank, an 18-year veteran of the industry, chose to serve local families in desperate need of help — a couple with nine children, a widower whose wife had been killed in a car accident. Earning a minimum of $800 a week, she's successful, but not rolling in dough. "I think most of us who do this for a career do it because we love working with children," she says. "It's not just about some highfalutin lifestyle."

Yet over the years, the industry has shifted. Mexican immigrants took over the role of housekeepers for the moneyed classes, while ambitious young women flocked to college programs in early childhood education. Exposés such as The Nanny Diaries didn't help the cause, nor did the proliferation of lawyers and professors who insisted on calling their 19-year-old sitters nannies. It's hard to convince a modern woman that she should pay $7,000 to learn how to care for other people's children.

"When I started, the word nanny was special," Roth mourns. "Now, anybody who just watches children calls herself a nanny."

Today, Roth finds herself with a labor shortage. Wealthy families still light up her phone lines, but she doesn't have the workers to give them. This spring, her class boasts only six students.

On a sunny May afternoon, they gather in a circle, wearing pink school shirts and holding dolls for a lesson on infant massage. The class includes Jessica Everson, a 23-year-old from Toronto, Ohio, who has been babysitting for five years, and recently "just decided to step it up and get the more money and better jobs."

Then there's Kristin Gaudette, a Maine social worker who got burned out by the red tape. She practically glows when speaking of her new career. "I can't imagine waking up and working with children," she says. "To me, that's not work. That's life."

Kelli Koba, a former school principal from Fredericksburg, Virginia, stands out in the group, thanks to a few gray streaks in her hair. She's an Army vet with a master's in education, who speaks five languages. Now that her youngest children are graduating high school, she's pursuing a new life outside the classroom. "I'm hoping that the parents will appreciate my experience and kind of lean on me," she says.

She's no Mary Poppins, to be sure. But in a world short on starched linens and nuns who sing on Austrian hillsides, she will have to do.