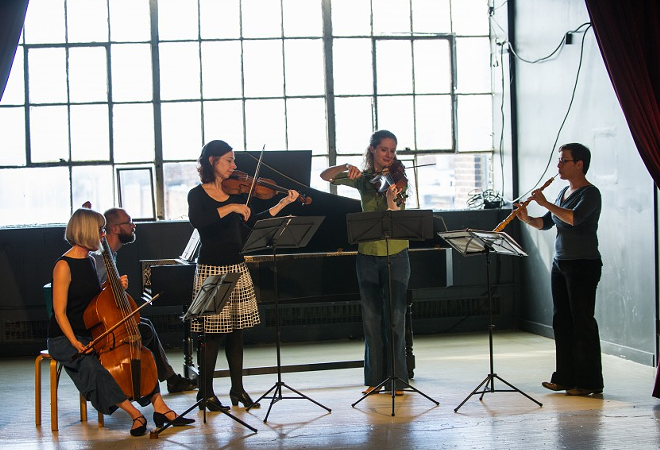 Cleveland Institute of Music faculty and students will come together on Wednesday, March 7 at 8:00 pm in a concert that features CIM’s new cello ensemble Locacelli in the first performance of William Cayanan’s The Madrigalist. The composer plays in the ensemble, along with Wei-An Hung, Cheuk Yan Vincent Leung, Paul Maxwell, Sarah Miller, Chad Polk, and Eva Roebuck. Also on the program are works by Fauré, Mendelssohn, and Brahms performed by Jinjoo Cho, Jaime Laredo, and Cameron Alan-Lee, violins, Eric Wong, Serena Hsu, and Patrick Miller, violas, and Si-Yan Darren Li and Sharon Robinson, cellos. You’ll need free seating passes for the concert in Mixon Hall. Call 216.795.3211.

Can you successfully turn a classic mystery story into an opera? Benjamin Britten did just that in 1954 with his adaptation of Henry James’ The Turn of the Screw, a psychological thriller as clever in Britten’s musical construction as James’ novella is in its literary technique. Oberlin Opera Theater will bring the tale to life in Hall Auditorium on Wednesday, March 7 at 8:00 pm, with repeat performances on Friday and Saturday and a final matinee on Sunday, March 11 at 2:00 pm (two casts will alternate). Jonathon Field directs, and Christopher Larkin and the Oberlin Chamber Orchestra will provide thrilling — and chilling — sounds from the pit. Tickets are available online.

The parade of top-notch pianists continues this Thursday at Severance Hall. We’ve already heard the superb artistry of Jean-Yves Thibaudet and Yefim Bronfman in the past two weeks. This weekend Daniil Trifonov will partner with guest conductor Michael Tilson Thomas and The Cleveland Orchestra in Prokofiev’s Second Concerto. “MTT” will also lead the Clevelanders in Stravinsky’s Scènes de Ballet and in Tchaikovsky’s heart-wrenching Symphony No. 6, dubbed the “Pathétique.” Tickets available here.

Another first-class pianist, Andreas Haefliger, will take on Beethoven’s fiendishly difficult “Hammerklavier” Sonata along with another Beethoven work and music by Alban Berg and Liszt when he plays Tuesday Musical’s annual Margaret Baxtresser Recital in E.J. Thomas Hall at the University of Akron on Thursday, March 8 at 7:30 pm. Tickets here.

One of the most famous death arias in the literature is the lament sung by Dido, Queen of Carthage, near the end of Purcell’s Dido and Aeneas. Soprano Clara Rottsolk will take that on — as well as other Dido-centric music by Cavalli and Montéclair — in the next concert by Les Délices. By way of contrast, Baroque harpist Maria Cleary will play solos and improvisations, and Debra Nagy’s Baroque ensemble will be featured in chamber music by Henry Purcell. There are two shows: Saturday, March 10 at 8:00 pm at Lakewood Congregational Church, and Sunday, March 11 at 4:00 pm in Herr Chapel at Plymouth Church in Shaker Heights (pre-concert talk at 3:00 pm). Tickets can be purchased online.

Remember Scheherazade, who kept her head on her shoulders for a thousand nights by telling cliffhanger stories to her bloodthirsty king? Nikolai Rimsky-Korsakov wrote a famous orchestra piece on the subject, giving Scheherazade’s lines to a solo violin. Vinay Parameswaran will lead The Cleveland Orchestra in some of those tales in a family concert at Severance Hall on Sunday, March 11 at 3:00 pm, enhanced by the costumery, magic effects, and puppetry of the Enchantment Theatre Company. Book a berth and embark on Sinbad’s ship here.

Check out details of these and many other classical music events on our Concert Listings page.