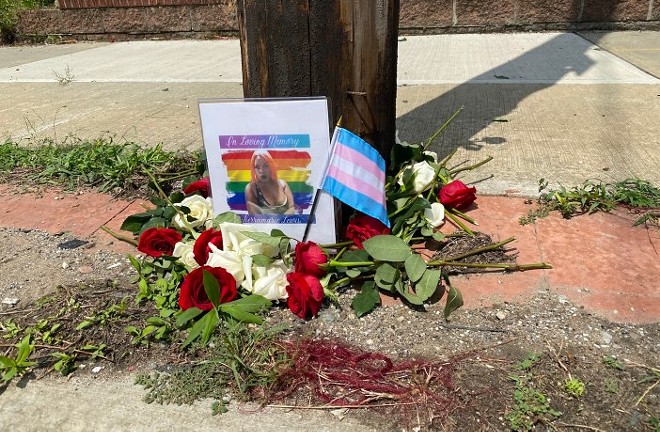 Photo by Ken Schneck
A memorial for Tierramarie Lewis

More than 40 individuals gathered in Cleveland on Thursday afternoon to celebrate the life of Tierramarie Lewis and to speak out against the continued murder and poor treatment of Black trans women in society.

The crowd assembled on the corner of East 79th Street and Cedar Avenue where the 36-year-old Lewis was found murdered on June 12.

Following the publication of a story by The Buckeye Flame last week, Lewis’ murder has been covered by national media outlets and organizations including the Human Rights Campaign, LGBTQ Nation and them., with much of the coverage focused Lewis’ misgendering and deadnaming from local officials.

Thursday’s memorial featured speakers from various organizations and from individuals who had spent time with Lewis. Below are selected quotes from the speakers at the event:

Too often we lose our Black and Brown trans sisters, and they are just another name that we are reading off and their story is not appropriately told. So we are going to celebrate [Tierramarie] and we are going to uplift her. Tierramarie was an amazing individual. She was beyond amazing. She was far too young to have her life stolen from her. We know that in the city of Cleveland and all across the country, far too often, our Black and Brown trans sisters’ lives are cut short. People should be able to just live and be. Tierramarie should have been able to just live and be. -Gio Santiago, Northeast Ohio Organizer, Equality Ohio


I met Tierramarie just about one year ago. Tierramarie was a good human being. She was really trying to find her spot in the world. She went through a lot of pain and a lot of trauma but she never let any of that take away her innate beauty in her soul and in her heart. She shared the stories of her life with us and she encouraged us to share our stories. She really loved her life. She was ready to have the life she deserved here in Cleveland. She was a young, enterprising individual with so many dreams and life in her. Tierramarie tried to find that safe space for herself so she could build that life she was trying to create. But everywhere she went, there was always someone there to make her feel unsafe, to take away her dignity, to harass her, to humiliate her, to make her feel like she was in danger.

What we’re discovering from all these terrible tragedies and murders is that our reporting system is broken. The way that first responders communicate with the medical examiners who communicate with the media who then communicate with the public…that system of communication is designed to erase trans people. Like how we’re erased in life, guess what? It happens in death, too. Misgendered and deadnamed is the final indignity. You can’t even say anything about it. And no one knows it has happened. The number of trans deaths we are aware of are only a tiny fraction of the true extent of this crisis. -Eliana Turan, Development Director, LGBT Community Center of Greater Cleveland


I started the Trans Wellness Program two years ago and in that time I was able to bridge a connection with a lot of different organizations. One was the B Riley House, which is how I met Tierramarie. Tierramarie came to the B Riley House and wanted to change her life around. She said, “I’m tired. I’m tired of drugs, I’m tired of being a prostitute, I’m tired of being a sex worker. Somebody help me.” I met them her there, and not just her, but also bunch a bunch of trans women. So we made arrangements to get them to attend the Trans Wellness Program. Once they came to the LGBT Center, it was like a weight was off their shoulders. “Wow. There are other trans people. I’m not the only trans person.” -Tamika “Devinity” Jones, HIV Prevention and Trans Wellness Coordinator at the LGBT Community Center of Greater Cleveland


We need to pay attention to those who are around us in the community. I know we have our own upbringing, our own education, our own training, but it’s called community. These are people that are in your community… At the end of the day, who you will be serving is that community.

Enough is enough. I’m tired of being a trans woman, and especially a Black trans woman and speaking at numerous vigils. I’m tired of sitting here reading off the name of another slain sister that could have been here. When is this going to stop? When are we going to wake up and say that this is enough? -Jones


I met Tierramarie in October of 2020. She had her ups and downs. Every time she would get out of the car, I would say, “Be safe.” I want to acknowledge that we can’t always keep the ones we love safe. Even though we try as advocates to work as hard as possible to make spaces that are built for heteronormative culture, as we try to make them safer for our LGBTQ folks, sometimes that doesn’t happen. And in this instance, it didn’t happen. Losing [Tierramarie] has been an absolute tragedy. -Carey Gibbons, Outreach Worker, Northeast Ohio Coalition for the Homeless


I am a Black woman of trans experience, and as I come here today to lift up the life of a person that I’ve never met, I realize that we share something in common. We are in a society that marginalizes us beyond compare. A part of the reason we have the systemic problems that we have in this country is because our society is based on a competitiveness. Everything is perceived as a competition of resources. And because of the way we have evolved, Black people are at the bottom. And if you are any diversion or variant of Black, you are at the bottom of the bottom. This is about human dignity. This is about not having enough resources, not having enough opportunities, being squeezed out of spaces, and being left to die.


Originally published by The Buckeye Flame. Republished here with permission.