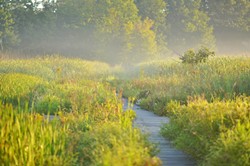 ERIK DROST / FLICKR
This week, service employees of the Cleveland Museum of Natural History began “hand-spraying” Mentor Marsh with an herbicide that includes the chemical glyphosate. Next week, the chemical will be sprayed across various points of the park’s 691 acres via helicopter.

The herbicide work will be done in tandem with other efforts to revive the park’s biodiversity and reputation.

The use of glyphosate is causing concern for some in the area. The marsh is surrounded by little residential developments (e.g. Deer Wood Estates, Tall Pine Estates, Woodhill) comprising hundreds of homes.

The story took off when the city posted a video on Youtube detailing CMNH’s plan to eradicate invasive reeds (phragmites). David Kriska, the biodiversity coordinator of the CMNH, explained that a helicopter will be spraying “Roundup” across the marsh. The city responded and clarified: “The generic usage of ‘RoundUp’ was given since most people really don’t know what glyphosate is.” A city rep later wrote in a Youtube comment that Aquaneat will be used. (According to a report developed by Oregon State University and Intertox Inc., Aquaneat contains 53.8 percent glyphosate to Roundup Pro Concentrate’s 50.2 percent.)

The city, via social media and email communications with residents, has insisted that a) the spraying is being done in accordance with EPA regulations and b) the matter is out of their hands, as CMNH is the "steward" of this land. Inquiries left with CMNH had not been returned as of Tuesday morning.

Still, glyphosate is no stranger to worrisome scientific studies and public outcry. Mentor resident Austin Homrighaus, who lives near the marsh, isn't convinced that this herbicide method is the best recourse for the community: "There is no way that won’t affect my property and the dozens of other properties that surround the Marsh’s perimeter," he says. "I fear for long term effects this will have on the health of wife, daughter, dogs, and self, as well as the Marsh’s plant and animal life."

In March 2015 the World Health Organization's International Agency for Research on Cancer classified glyphosate as "probably carcinogenic in humans" based on epidemiological studies, animal studies, and in vitro studies. Colombia announced in May 2015 that by October it would cease using glyphosate in coca eradication programs due to concerns about human toxicity of the chemical.

Monsanto developed and patented the use of glyphosate to kill weeds back in the 1970s (which patent expired in 2000); the chemical has been marketed as Roundup since 1973. Glyphosate has since become a flashpoint of controversy since — still in wide use even as many government agencies begin backing away from it.