Here's the Plain Dealer Story on the First Baseball Game at League Park, 125 Years Ago Today 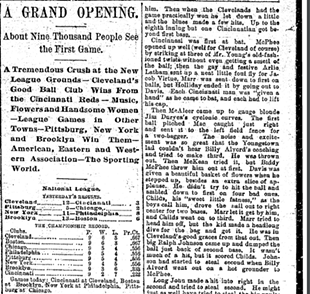 Take us to the scene, anonymous 1891 sportswriter.

“At eight minutes past 4 o’clock yesterday afternoon Denton Young, ex-rail splitter, put a double reef in his trousers, wet a brand new Spalding base ball with his fingers, smiled grimly and then propelled his arm through space, releasing the ball as he did it.

“It sailed gently toward a rubber plate firmly fastened in the ground some feet in front of him and passed directly over the center of that plate.

“Standing on one side of that piece of rubber was a young man dressed in a baggy blue flannel uniform with a great big bat in his hand. This man was Biddy McPhee. He made not a move when that ball passed over the plate and Umpire Phil Powers gently murmured “one strike”. The base ball season of 1891 was open in Cleveland and the heart of the lover of the game was glad.”

A few of our favorite snippets — read: old-timey newspaper prose — are below. First, about fans wandering onto the field for a better view.

And second, a feeling among the fans that three geese flying overhead were the cause for three runs in an inning.