Holton-Wise to Justin Bibb: Come At Me, Bro

The Justin Bibb campaign couldn't have scripted it any better themselves.

James Wise, the brash, bearded CEO of Parma real estate firm Holton-Wise, has taken to one of his several YouTube shows to criticize the mayoral candidate in response to his "eviction notice" earlier this week. (Video above.)

Bibb stood on the front steps of a Holton-Wise property on Cleveland's west side and said that if elected, companies like Holton-Wise would no longer operate with impunity in the city. Holton-Wise tends to target inexpensive properties in vulnerable neighborhoods and then gleefully evicts and mocks their low-income tenants en route to flipping the houses for profit. Bibb decried these practices and promoted his housing agenda, which included more rigorous enforcement of landlord-operated properties and support for Pay to Stay legislation that protects tenants from immediate eviction. 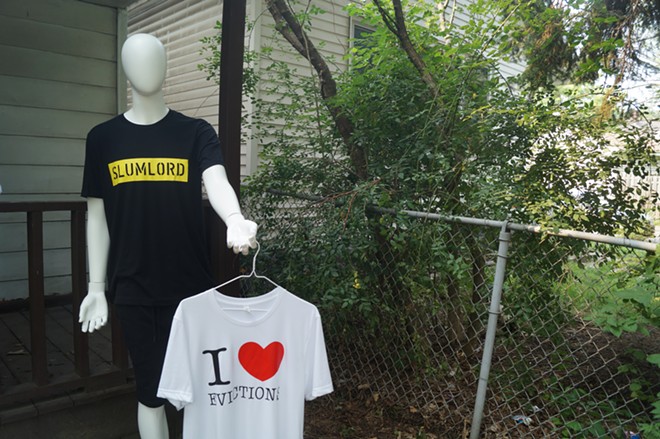 Wise, on his show, called Bibb a "socialist asshole" and said the 34-year-old executive's platform was nothing but "anti-cop, anti-safety" "socialist, communist" rhetoric. He showed a number of clips from Bibb's press conference and said the candidate was blaming landlords for existing urban problems.

"Is it just my language that offends you, bro?" Wise asked. "Is it just because I don't show up to work in a fancy suit every day? Because I don't wear a tie every day? Hell, I don't even wear a shirt every day when I'm at work. Is it because I don't have your pedigree ... because I grew up in Old Brooklyn and went to Tri-C and stopped after a two-year degree, and I just happen to work fucking hard for my money? Is that what bothers you about me?"

Wise leveled a number of accusations. He said the Scene story covering Bibb's press conference was inaccurate; — he was right: we inadvertently referred to Holton-Wise as a "predatory lender," and quickly corrected the mistake — he said that Bibb was hypocritical for criticizing out-of-state investment when his own campaign was funded in large part by out-of-state donations; and he tried to reframe Holton-Wise's love of evictions as a love of safety.

(Tenants who don't pay their rent are criminals, according to Wise's logic, and so evicting them means ridding communities of criminals, thereby promoting safety.)

Wise, who evokes the vibe of a Charlie Day Evil Twin, was sharp enough to note that Bibb was using opposition to Holton-Wise to "stir up controversy" and generate publicity for his campaign. This is no doubt true. But Wise's response only makes the Bibb press conference look like more of a master stroke. It reveals Wise even more luridly as a villain. As Bibb remarked at his press conference, Wise's videos were so offensive that he first assumed they were parodies.

Wise, though, seemed eager to extend the controversy.

"If you're going to come at me," he taunted, near the video's end, "come at me with facts. Come at me with something specific that explains what you think my company is doing that's predatory."

Given the contempt for Holton-Wise across Cleveland, that specificity will be in ample supply if the Bibb campaign chooses to pursue this battle further.