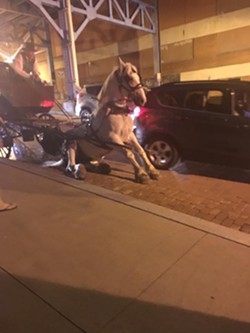 EDIE GRABSKY / FB
Shamrock Carriages does not have a great reputation in Cleveland, and this past weekend saw once again how nightmarish the whole horse-drawn carriage situation can be for animals who have no control over their experience.

On Saturday, a horse fell down on the Main Avenue hill while hauling around a massive sleigh for Shamrock Carriages. (Main Avenue is the steep, brick-lined incline between West 9th and the Flats, which is, objectively speaking, an insane place to take a horse.) A Facebook post about the situation ended up attracting thousands of comments over the weekend, with most people remarking that this demonstrates a very clear danger to the animal and damning ineptitude on the part of the carriage operator.

"He was clearly terrified because he kept peeing everywhere and was so exhausted he was not able to stand," Evie Grabsky wrote on Facebook, "and yet the carriage driver was trying to get him down the hill and to keep going instead of pull[ing] him off to the side of the road to avoid being hit by a car like many horses being used for this do."

Video of the later part of the incident shows the horse lying on the ground as people try to help it up. Once it's upright, the horse runs down the hill into late-night bumper-to-bumper Flats traffic before falling down again. Many people are seen coming to the aid of the horse, while the driver mostly gives the crowd the cold shoulder and fusses with the horse's harness.