How and Why the Destitute Dead of Northeast Ohio Are Remembered

A quest across the River Styx 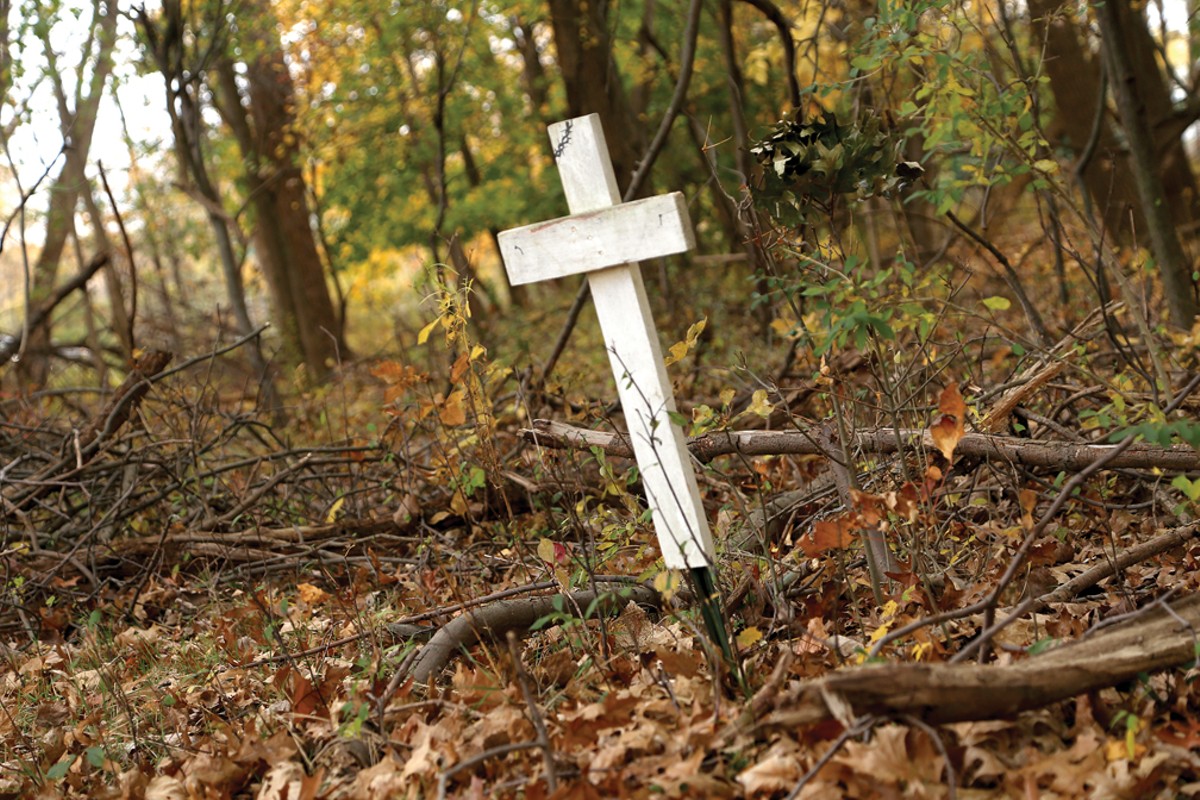 Bricks are stacked at one end of the Medina County Home Cemetery.
"I had always heard about the cemetery, because I grew up in the area," Bowers says. "But, you know, things that didn't really need to be a secret were a secret."

Bowers is known around town as a "cemetery nerd," she says. These stories matter to her. After a lifetime of picking up on faintly whispered rumors of a potter's field somewhere in the area, she began to dig for the truth and try to find out where this place could be. She began to talk about her quest into the past, gathering compatriots along the way.

Former Medina County administrator John Stricker took note. And as serendipity tends to sprout in special moments, Stricker called Bowers in February 2006. He would die of lung cancer two weeks later, but first he needed to share an unexpected discovery with Bowers. "He called me and he said, 'I'm at the county offices, I'm in my old office. I have something that you want. Come here.'

"When a guy who you know is dying calls you and says he has something you want, you go," Bowers says. She went.

She arrived to find Stricker's desk completely bare, save for a single sheet of paper that he slid toward her. "This is what you're looking for," he said. "You'll know what to do with this."

It was a hand-drawn map of a cemetery on Deerview Lane.

The term "potter's field" comes from the New Testament, Matthew 27:7 to be specific, and it refers to "a burying place for strangers." By Biblical accounts, Judas Iscariot killed himself in grief after betraying Jesus Christ for 30 pieces of silver. A group of priests used that bribe money to purchase a plot of land and began burying strangers and cast-offs like Iscariot there.

Two thousand years later, not much has changed.

"There are cemeteries like this all over the state," Bowers says, referring to long-hidden potter's fields. And even though Cleveland's potter's field isn't actively covered up by time and vegetation, one could still argue that it's been hidden from the local consciousness, what with no address, sign or headstones.

The small plot of land on Deerview Lane was once part of the Medina County Home's property. In the early 20th century, the home was a place for the destitute, the indigent, the insane. (These days, anyone can live there — even, say, snowbird millionaires who winter in Naples and live at the county home the rest of the year — as long as they cover the monthly rate.)

Around 100 years ago, when the home brimmed with the down-and-out, there wasn't a law on the books that dictated what to do with the penniless dead. When paupers died at the Medina County Home — just like countless other facilities the world over — their bodies were sort of just tossed into a convenient corner of the property. In this case, they were sent about 100 yards up the road to a small and mostly ad-hoc burial ground.

For the past 14 years, municipalities have covered the costs of indigent burials. (The state of Ohio allotted $750 per burial prior to 2001.) Couple that with the past few decades' push for increased transparency and sunshine laws, and the records of such afterlife protocol bear out at least a baseline of reverence not seen in earlier years.

The last known burial at the Medina County Home cemetery took place on Sept. 18, 1950. From there, time and social pressures pushed memories of the place into the local ether. Already an undesirable topic for the dinner table, the cemetery and its residents washed into the recesses of history. Weeds and poison ivy took root. In the 1970s, the county ran a water line through the land with nary a mention of the dozens of pine boxes and bodies resting underground. It's possible the workers didn't even notice.

Stricker's map changed everything, though. Bowers and a group of people — including local historian Eli Beachy and Deerview Lane resident Jim Cottrell — suddenly had some facts with which to line the old rumors. The quest began in earnest.

Bowers and the collective fished through old Medina Gazette articles for hours on end. For instance, she learned about Joe Pornoski, one of the final men to be interred at the cemetery. From the newspaper's July 1, 1949, edition: "Joe Pornoski, 65, who had been employed until two weeks ago by Frank Gavalak on County Road 38 in Brunswick township, ended his life by hanging himself to a tree in the apple orchard of Joe Gavalak a short distance away on the same road, sometime Monday."

That's what happened to Joe Pornoski. These stories matter.

But first, the group had to unearth the cemetery itself. A group of local residents gathered regularly at the site to clear away brush, cut down trees and haul off debris. "A lot of people got poison ivy," Bowers says.

Once cleared, clues to the property's history became clearer. The next step of Bowers' quest was to record the lives of everyone buried there. Much like the physical work, this was not easy.

One man, 101 years old now, remembered burying people in the cemetery. He helped clarify the extent of the hand-drawn map to Bowers, pointing out the depressions that signified shallow graves marked on the paper.

With the map in hand and the cemetery property clearing up, Bowers began requesting any and all public records pertaining to the cemetery parcels. County offices turned Bowers away, saying that there were no records of anything. "No one was talking about anything," she recalls.

She was hoping to gather records from the county home, hoping, for instance, to find payments from the county to the home for indigent burials. From there, she figured, she could identify names associated with payments, and then learn who was buried in the cemetery.

"And if they weren't buried in any other local cemetery, you can assume they were buried on the county home property," Bowers says. No dice; no one was giving up records. Hence the turn toward newspaper microfilm.

"The county home — and therefore the cemetery itself — is a microcosm of America," Eli Beachy told the Medina Gazette in 2007. "It's a good reflection of how we were. Plus, there are so many stories in this cemetery, they just can't be forgotten."

Along the way, as this research unfolded in the mid- to late-2000s, Wooster resident Mike McCann assembled all of the records into one volume. McCann has done this sort of cemetery cataloging work in counties all over Northeast Ohio.

The end result is a massive tome of data about many cemeteries in the area. Each of the 192 burials in the small cemetery was given an entry in the book — an historical note memorializing that person.

Indigent burials continue regularly in Medina County and elsewhere. (Most indigent burials involve the "cremains" of a person and, in Medina County, take place at Waltz Cemetery.) But having a legal framework to outline the process doesn't mean that civil society confronts this issue any more often than people did 100 years ago. Bowers says she and the group worked on this quest for eight or nine years, filling in wide gaps of local history and memorializing the hidden dead of her township. The place is visible now, but it still occupies only a quiet corner of the world around it.

"Nobody really wanted to get stuck with a cemetery," Bowers says of various agencies' unwillingness to act as stewards of the land over the years. "But it was very important to me. I just wanted the county to recognize the area, to preserve the area. It's protected now."

There's a line often credited to graffiti artist Banksy that goes like this: "They say you die twice. One time when you stop breathing and a second time, a bit later on, when somebody says your name for the last time." It was hard not to think of that idea while walking across a cemetery and recalling the names read aloud at the Cleveland prayer service, or sifting through the records gathered by Bowers and the rest of her group.

"You want to know anything about Lafayette cemeteries, go call Lynda. She's the cemetery nerd." That's what you might hear if you truck down to Medina County and start asking questions about where all the bodies are buried. At least that what Bowers tells us.

There's good reason for that. She comes from a "very military family," and she was raised with a great deal of respect for the country's war dead. Just about every cemetery in the U.S. lays claim to the memory and honor of someone lost in war. It's as true in Medina County as it is elsewhere.

Those stories may appear to be locked up now, 6 feet deep in Ohio soil and covered with time. But as long as we take a moment to remember, these lives are not lost forever.

"I didn't want to lose that stuff," Bowers says, "so I collected as many stories as I could."


[Editor's note: A reference to where the Saint Joseph of Arimathea Pallbearer Ministry conducts burials has been edited to correct an inaccuracy.]