How to Tell LeBron He Can't Dribble or Shoot 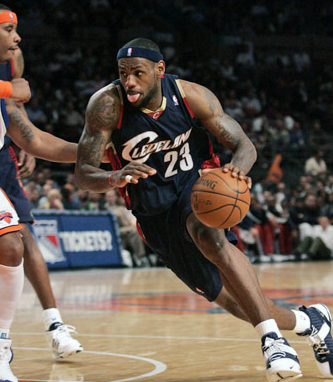 LeBron James' work ethic is unquestionable. He's a gym rat. That much is well documented. He takes Chris Jent on his worldwide junkets, always finds time to hit the gym to work on his game for a couple of hours, and despite his heavy off-the-court schedule, is in absolutely incredible shape. Each year he seems to take one aspect of his game and work on it. Free throws. Threes. Post game.

But what about coaching? Does LeBron listen to Mike Brown? Does he listen to Chris Jent? Is he surrounded by Yes Men? More importantly, how do you motivate someone who is the best player in the league?

Chris Ballard's new book The Art of the Beautiful Game was recently released, and although I haven't picked up a copy yet, there are a few excerpts on SI.com. One of them centers on the "Basketball Whisperer" — a former lawyer with no formal hoops coaching or training experience. Idan Ravin nevertheless is a sought after commodity for NBA players. Upon a recommendation from Chris Paul, LeBron visited Ravin in the summer of 2008.

James's weakness, Ravin believed, was his dribbling, so he immediately ran the Cavaliers' star forward through a series of intricate ball-handling exercises. Whenever James looked down to locate the ball, Ravin gently tapped him under the chin, a reminder to keep his head up. Granted, this exercise could go horribly awry — you want to tell LeBron James he can't dribble? But as long as Ravin's critique is correct (and in this case it was), his method establishes him as an authority figure.

"The only way to tame a 10,000-pound tiger is to immediately show a level of control," says Ravin, drawing an analogy from the novel Life of Pi. "When LeBron's head goes down and I tap his chin up — nobody does that to him. He's not used to it."

Next, Ravin ran James through grueling conditioning drills, all related to game situations, because he'd noticed that James was a bit out of shape (at least by Ravin's high standards). By the end of the hourlong workout, the Cavaliers' star was lying on the floor, gassed. Only then did Ravin address him. "You are far and away the most talented player in the league, way more talented than Kobe," the trainer said. "But you don't even have a go-to move in isolation, you can't handle the ball that well, and you can't shoot, really. Think about that."

James sat silent, biting his fingernails and looking "sort of pissed," as Ravin remembers it. "Look, I'm not here to hurt your feelings," Ravin continued. "But I'm not on your payroll, either. I'm not trying to be mean, I'm trying to help you get better. You're a 30, eight and eight guy, and there's so much yet to do. That's exciting."

James came away impressed. "It was tough but it was good," he said later. "I see why a lot of NBA guys work out with him."