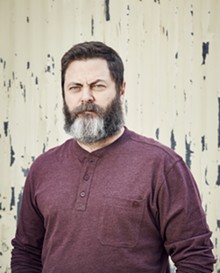 Courtesy of 42West
A guy who originally worked in theater, actor Nick Offerman became a household name after portraying Ron Swanson in the popular sitcom Parks and Recreation.

Post-Parks and Rec, Offerman would receive high praise for his portrayal as a lawyer in Fargo. The deadpan humorist brings his Full Bush show to Connor Palace at 8 p.m. on Sunday.

We phoned Offerman, who was hanging out in his woodshop having some “good downtime fun” while “steam-bending molds for Curbside ukuleles,” to talk about the upcoming show. He told us he loves coming to Cleveland too. “[David] Letterman led me to believe that Cleveland wasn’t all that, but I’ve found it to be full of charisma,” he says. “The city has many delicious meats and whiskeys.”

Talk about the genesis for the current show.
It’s kind of stupid, like most of my material. I finished my tour called American Ham and shot a special of that, which is on Netflix now. My agent booked some more touring dates. At some point, she asked what I would call the tour. I thought about it for a second and said “Full Bush” because I thought it sounded funny. I reverse-engineered the show, which was not hard to do, and fleshed out a lifestyle philosophy centered around that phrase. I took it to Australia and New Zealand. I developed the seven or eight songs in the song. It’s a continuation of my own personal career as a humorist.

You play a few songs too. Do you have a favorite comedic songwriter?
Good question. I suppose the songs of Monty Python and the songs of Christopher Guest in Spinal Tap and A Mighty Wind spring to mind. The Smothers Brothers too. It’s an appreciation for all silly songs going back to Irish songs with a sense of humor or Tex Ritter. One of my songs is an interpretation of “Plastic Jesus,” which was sung by Paul Newman in Cool Hand Luke. There’s nothing refined or scholarly about it. I’m continuing the fine American tradition of the singing jackass.

You grew up in the suburbs of Chicago. What was your childhood like?
It was actually very different from the suburbs. It was a lonely little farm town in the middle of the cornfields even though it was just an hour outside of Chicago. It felt like I was an hour and 50 years from Chicago. It was conservative and bucolic upbringing. It was magnificent in many ways. It had all the benefits of a large farm based family and small town sports and marching band and a lot of freedom because as a kid we could ride our bikes wherever we wanted to. The modern sensibility of fear and crime had not permeated. At the same time, as I developed into a town, I became aware that the town was incredibly conservative and there was one popular accepted viewpoint and that was very white and leaving to the right. It was not accepting of people with different-colored skin or sexuality. That unconsciously drove me to the arts. It was such a different time and now my little town has exploded with population because the commuters of Chicago have reached these farm towns where the school districts are amazing. Driving from Minooka to Chicago is the equivalent of driving to a grocery store in Los Angeles. It’s just 45 minutes.

Were you funny as a kid?
Um, I suppose. I was definitely a bratty class clown. I pushed the envelope to see what I could get away with. I was also a good student. I would toe the line with teachers and administrators to find out how much humor they would brook while still giving me an A.

How’d you first meet Amy Poehler?
I knew Amy early on when she was starting in Chicago, but I was a traditional classically trained theater actor back then. The thing people don’t realize is that you think of Shakespeare and Eugene O’Neill when you think of comedy. But in any season, you have equal parts tragedy and comedy. I enjoyed being funny and making people laugh. I didn’t get involved with comedy until my mid thirties when I started with Amy at her Upright Citizens Brigade Theater in New York. I was spoiled because they have shows designed to take eight of their master improvisers and pair them with one clumsy improviser like me. I do something dumb and then they can riff scenes off of it. While I was lucky to share the stage with many of them, I don’t have the skills they do. That dynamic played out in Parks and Recreation. I would let the other cast members because the funny and dynamic engines that they are and I would hold still while that was going on and try to say one funny thing.

To what degree were you able to have input into the Parks and Rec character Ron Swanson?
Any input that I had was offered just by showing up. The genius of great comedy writers, which we had in spades, is that once you get cast, they realize it’s funny the way you eat a sandwich and can write around it. When people write funny things based on your personality and characteristics, then maybe one of the 10 jokes you have an idea that can add you to the flavor. By and large, we were spoiled to not be required to bring in much of all except for what rode in our shoes.

Do people ever call you Ron?
Sure. Quite frequently.

You were terrific on Fargo. What was it like to work on it?
Well, thank you for the compliment. When Parks and Rec ended and having gone through Will and Grace with my wife, I was aware of the epic scope that a TV series like that can have. It can have an impact have on your career. I didn’t want to jump into another TV series unless something came along that just spoke to me and could be like Breaking Bad or Mad Men or something. Nothing did. The stuff I got offered was derivative of Ron Swanson. I didn’t want to do TV. I wanted to do some theater and films. [Writer and producer] Noah [Hawley] from Fargo got ahold of me. They sent me some scripts from Season 2 of Fargo. I couldn’t pass it up. I thought it would be an incredible treat. It was. He and [producer] J0hn Cameron run an incredible outfit in Calgary. It had the pleasure of a small crew. You get that feeling of a theater company or shooting an independent film. That feels better artistically. When you get the big studio pictures, they have their advantages, but a feeling of small communal artistry is not one of them. On a big budget shoot, you begin to feel like a prop. Fargo was the opposite of that. Getting to work with actors of that caliber and performing masterful dialog was an absolute dream.

It must be gratifying to be able to find time to hit the road even though you have all these projects going on.
It’s a strange can of worms, what my life has become. I’m very lucky to have four or five successful plates spinning in my circus act. Figuring out which one to spin for a few months is both challenging and rewarding. Touring as a humorist is in the crucible of all my different disciplines and the purest form of communication. I together with a bunch of people in a room and tell people what I’m talking about, some of them with a guitar with A/B rhyme schemes, and hoping they provide me with the medicine of their laughter. Especially in this crazily divisive and volatile time in the country I relish the chance to perform. There’s little of that in my show. We’ve had enough of people talking about politics. The show is really optimistic and there’s love in it. It ends with the suggestion that we look to hug before we punch.