I Am Cleveland... Believe in Cleveland 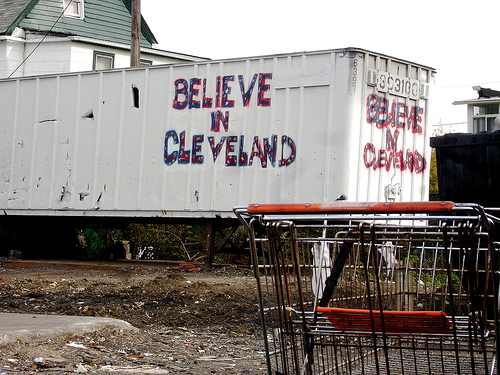 One of our Classifieds guys, Joe Strailey, likes to put keyboard to screen every once in awhile and try writing. After I tell him that's a good way to destroy a monitor, he puts pen to paper, and I transcribe his words here. These were his thoughts after the devastating loss to the Orlando Magic on Tuesday night.)

I know heartache. I know what it's like to see more vacant spaces for lease than actual businesses. I know empty parking lots that used to be full. I know rusted semi's that no longer move freight. I know picket lines. I know unemployment lines. I know how to tell someone they are being laid off. I know the feeling of hugging someone who just heard that news. I know how to watch an entire sporting event with my head down. I know where 'rush hour traffic' went. I know the current unemployment rate. I know a shrinking city. I know the look on a child's face when they look at me and wonder why I'm so sad after a game. I know punch lines, all of them. I know being the other team in a highlight reel. I know how the movie Major League really ends. I know Jose Mesa, John Elway and Micheal Jordan. I know what it's like to avoid ESPN for weeks at a time after a series. I know bewilderment. I know to 'wait until next year'. I know the definition of; almost, so close, choke and "here we go again". I know let downs, factory shut downs and thumbs down.

I am proud to be Cleveland.