What is your Cleveland baseball name?! pic.twitter.com/F7edD9aTmc

THE HORROR! THE STUPIDITY! GOOD GOD!

For the second time in as many months, the digital arm of Cleveland's major metro daily, cleveland.com, has published the dumbest possible version of an internet meme which invites readers to create a new name for themselves based on their first and last initials.

Today's garbage is occasioned by the Cleveland Baseball Team's Home Opener. (CBT is now 1-2 after a dispiriting opening weekend in Detroit.) Readers can make their own "Cleveland baseball name" based on the instructions above.

The central flaw in this #content, which I can't believe I'm wasting a Monday morning fuming over and producing additional content about, is that the "names" that result from the constructions are not names at all.

Chris Quinn, the editor of Cleveland.com, for example, has a first name and a last name: They are "Chris" and "Quinn." In the meme above, his Cleveland baseball name is "Progressive Field Grand Slam." That's the stadium where the team plays and a home run with the bases loaded.

But even that, a random collision of a place and baseball word, makes more sense than my own absurd composition. I am "Jim Thome Cesar Hernandez." This is not one name but two. This is not fun! Consider the indignity heaped upon iconic Cleveland announcer Tom Hamilton, who in this preposterous exercise has a Cleveland baseball name of "Team Store Third Base." TEAM STORE THIRD BASE!

The annoying thing is that this sort of thing actually could be fun. A lot of people, including myself, get a low-grade kick out of these bullshitty internet time-wasters. The bar is extremely low. But Cleveland.com refuses to meet it! They did a similar thing a few weeks back that resulted in even more head scratching.

This is the dumbest thing I've ever seen. https://t.co/TFeDPalxOr

The cynical take, here, is that the site recognized they were getting loads of engagement based on everyone's confusion and responses on the order of, "lol isn't this stupid?" and decided to make it regular thing. That'd be in keeping with the #content strategy at a number of both local and national outlets. Assuming we're not being trolled, though, the other possibility is that they simply do not understand how this works.

In which case, no harm done! But let's acquaint ourselves with the basics.

If you are cobbling together a random list of Cleveland places and objects, do not, under any circumstances, call the resulting formulation a Cleveland "name." Dispense with the name tag graphic. Remember: These are not names. Keep all the responses in a single column consistent and tailor the theme to the nature of the responses. If all 52 (first name, last name) responses are Cleveland locations, for example, maybe call it a "Cleveland Date Night." Feel free to play with variations. Maybe you use locations for the first initial and Cleveland celebrities for the last initial, the gimmick being that respondents are going on a date (romantic or platonic!) to a certain location with a certain person. Fun! A truly minor internet thrill, but well-executed.

If you're insistent on doing names, then make the answers actual names. I created the following in about 20 minutes using old Cleveland Indians and Naps rosters on Baseball-Reference.Com. 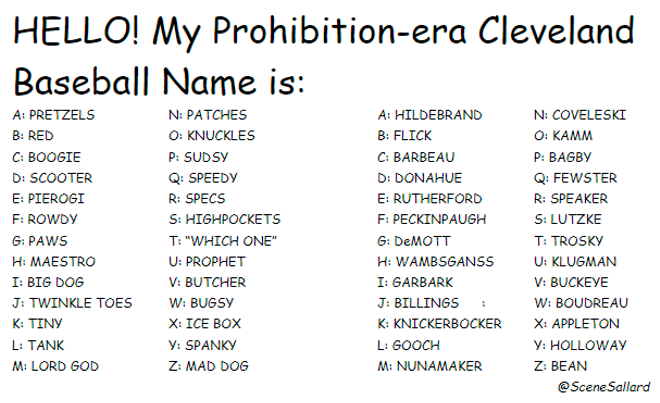