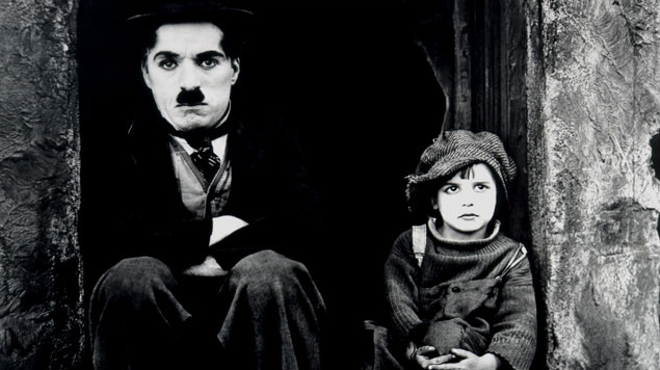 The Kid, film still
Improvisation is the theme for two events this weekend. On Friday, January 11 at 7:30 pm in Gartner Auditorium of the Cleveland Museum of Art, Pulitzer Prize-winning composer, saxophonist, and flutist Henry Threadgill will put his Zooid players together with Tim Weiss’s Oberlin Contemporary Music Ensemble in a Cleveland Foundation Creative Fusion commission.

On Saturday, January 12 at 7:00 pm in Gamble Auditorium at Baldwin Wallace, organist Todd Wilson will create music on the spot for two silent films, Charlie Chaplin’s The Kid and Laurel & Hardy’s Big Business.
Wilson only has to worry about himself (both fingers and feet, of course), while Threadgill has had to map out an improvisation plan for multiple instrumentalists, giving them some structure and parameters, but leaving them plenty of room to be creative. Tickets are available here for Threadgill and here for Wilson.

The Cleveland Cello Society’s annual “i Cellisti!” extravaganza on Friday, January 11 at 7:00 pm at St. Paul’s Church in Cleveland Heights will include the 45 voices of the Oberlin College Choir as well as a “choir” of 40 cellos. Gregory Ristow will lead the Obies in Sofia Gubaidulina’s Canticle of the Sun with faculty cellist Darrett Adkins. The program also includes Paul Desenne’s Glass Bamboo Frog Consort for cello quartet, and John Luther Adams’ Sky with Four Suns and Sky with Four Moons. Tickets (available online) support the Society’s scholarship program.

Oberlin ensembles will go off to perform in New York City this month, giving send-off concerts before they hit the Big Apple. First up this week, the Sonny Rollins Jazz Ensemble will preview their Jazz at Lincoln Center appearance with a free concert in Clonick Hall of the Kohl Building at the Oberlin Conservatory on Monday, January 14 at 7:30 pm.