In New Memoir, Author Eliese Goldbach Shows What Life is Like at ArcelorMittal Steel Plant 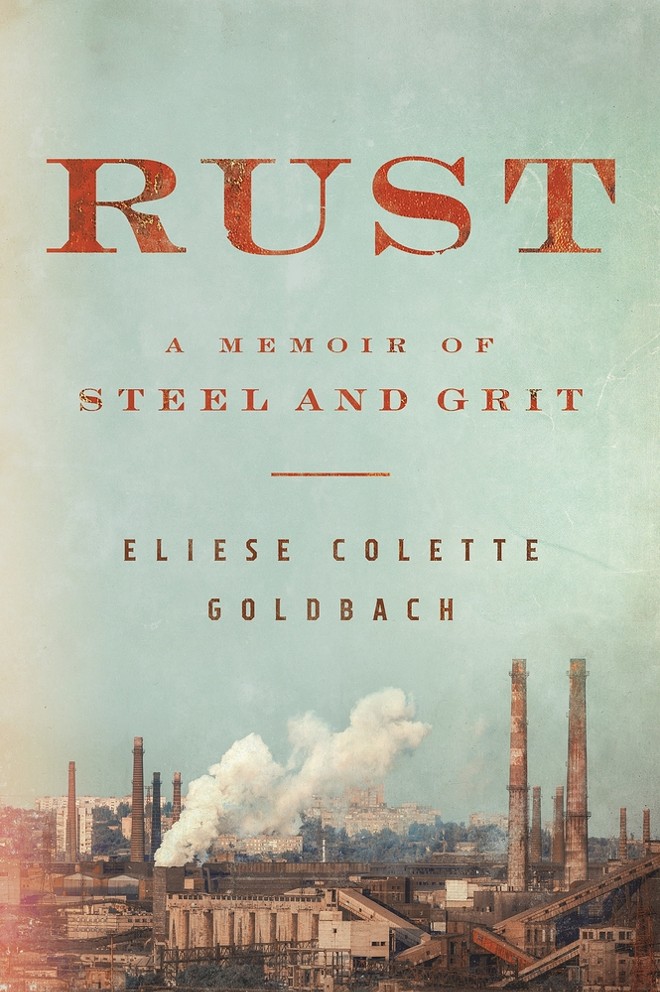 Flatiron Books
After the initial fish-out-of-water draw of RUST, a new memoir about working at the ArcelorMittal steel plant by Brooklyn, Ohio native Eliese Goldblach, one encounters its larger narrative project: understanding and accurately portraying the Rust Belt's blue collar ethos, conveying how the "grit" of a region's workers translates to political ideology.

Goldbach, now 33, is a 2004 St. Augustine valedictorian and English major who worked for three years at ArcelorMittal and began writing the book, in earnest, after the election of Donald Trump in 2016. The book publishes Tuesday and an excerpt will be published in Wednesday's print edition of Scene.

RUST encompasses Goldbach's experiences at the mill while also recounting her personal history, which includes a strict Catholic upbringing, battles with mental illness, sexual assault and the poverty and uncertainty borne of the Great Recession. She told Scene last week that she hopes the book might be a "ray of light in trying political times."

As she wrote about the sights and sounds of the mill, the sprawling complex in Cleveland's industrial valley where roughly 2,000 workers toil every day, she also interrogated her own beliefs and misconceptions alongside those of her coworkers.

"I was really looking at where our beliefs and our animosity and divisions come from, how we form our beliefs, and how we adhere to them and change," she said.

Goldbach certainly peels back the layers of her own life, but she also calibrates stereotypes about the mill and its workforce. The idea, for example, that steelworkers are all gruff, middle-aged white guys is a total misconception, she said. There are women, people of color and left-leaning employees too.

"I was initially surprised at how many people there were with college degrees," she said. "Some guys totally fit the mold — the "old-timers" — but there are also single mothers, millennials, liberals. It's a cross-section of Cleveland."

For Northeast Ohio readers, there will no doubt be pleasure in learning how steel is made and produced locally. Goldbach reports the processes in detail with no shortage of civic pride:

"Steel comes out of Cleveland," she writes. "Tons and tons of steel. It's not sexy. It's not exotic. It's dirty and hot and loud, but somebody has to do it. We feed the appliance industry, and we supply the auto industry. We make the types of steel that will be transformed into frames and innards and underbellies. We make the strong stuff. The TRIP grades. The dual-phase steels. The HSLA steel. We make the types of steel that don't collapse under pressure. What we make isn't glamorous, but it keeps you safe. What we make isn't fancy, but it keeps you moving."

And as she befriends and debates and learns from other employees — most of whom are union workers who are well-compensated for their dangerous labor — she recognizes the rage that fueled Trump's rise.

"I think the economy was the biggest thing that played into it," she told Scene. "especially with the older generation preparing for retirement. But I sensed, both in the mill and outside it, that there's this anger and they don't know where to direct it."

Trump and his rhetoric, of course, encouraged people to direct that anger at immigrants, women and people of color when they ought to have been directing it at the architects of inequality. In one passage, Goldbach notes that the owner of the steel company was a billionaire who spent $60 million on a weeklong Parisian wedding celebration for his daughter. If he had taken the wedding money and divided it up among the Cleveland steelworkers, she writes, each person would have received a $30,000 bonus.

'Don't judge a book by it's cover' may be a reductive moral of the story, but in 2020, the childhood lesson seems especially apt. For local readers, and certainly for Goldbach, the mill itself operates as that vein's central metaphor.

"Back when I was a little girl whose father drove her past the mill, I only saw the ugliness," she writes. "The mill was nothing more than the remnant of a decayed, dying industry, and the rust that decorated so many of its buildings seemed like a fitting shade."

Goldbach now teaches creative writing at John Carroll University. She'll be doing a number of publicity events for the book in the coming weeks, including a reading Tuesday evening for the Brews & Prose series at Market Garden Brewery; an appearance at the Beachwood Branch of the Cuyahoga Public Lirbrary (Thursday, March 12, 7 p.m.); and an appearance at the Lakewood Public Library (Thursday, March 19, 7 p.m.).