(Tim Evanson/Flickr)
The Ohio Secretary of State says Ohio's 88 county boards of election are well-prepared to move forward with the May 3 primary.

In Cleveland's Ward 3, lawyer and activist Chris Martin emerged victorious in his Democratic precinct committee race after tying his opponent, Karen Connavino, in the May 3 primary. Both candidates received 57 total votes in Precinct E, which covers portions of Ohio City and Duck Island south of Lorain and Abbey, east of Fulton.

According to the Ohio Revised Code, elections that end in ties are determined "by lot." And in Cuyahoga County, the preferred method is a coin flip. 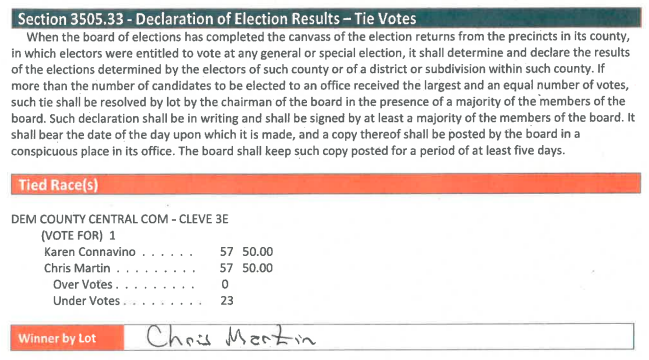 Cuyahoga County Board of Elections
Chris Martin was declared the winner after a coin flip at the BOE.


The race between Martin and Connavino was the only race that ended in a tie on May 3, but the Cuyahoga County Board of Elections' Director of Community Outreach, Mike West, told Scene that these outcomes are not terribly unusual. In his 14 years with the BOE, he estimated, there have been at least a half a dozen coin flips to break ties.

Though the statistical likelihood of ties dwindles as vote totals increase, West said that the same rules would apply in high-level races city and countywide. (So if Chris Ronayne and Lee Weingart tie in November in the County Executive race, the winner will be determined by coin flip.)

There is no specialty coin, West said. Any coin agreed upon by the candidates does the trick. Coin flips are conducted at a meeting of the board of elections, so that a majority of the BOE's members can be present to witness. The candidates call heads or tails.

In the Martin v. Connavino race, Connavino deferred to Martin, who called tails and won. Martin told Scene that there was an automatic recount this week, which he observed, and that the count remained the same — 57 to 57 — so the coin flip stands as the deciding factor.

Martin will become the Cuyahoga County Democratic Party's  Precinct Committee person in 3E. The committee is empowered, by the CCDP's bylaws, to elect the party's executive committee and party officers.