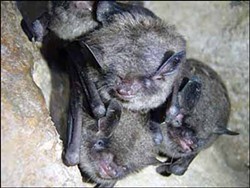 And today, we reported that conservation groups are planning a lawsuit against the federal agencies that auctioned off hundreds of acres of Wayne National Forest (with thousands more to come), zeroing in particularly on the Indiana bat, a federally listed endangered species whose habitat in southern Ohio is inextricably threatened by imminent drilling operations. (Companies were only allowed to bid on public land if they committed to extracting minerals from it. Peaceful conservationists have been fined millions of dollars and jailed for bidding in these public land auctions.) The Indiana bat is not alone in its predicament, though it's not like bats can argue the matter.

That's where the Center for Biological Diversity comes in. That group is one of three threatening the lawsuit in question. Across the U.S., they insist that it's the duty of an array of federal agencies to protect endangered species living on public land.

Many of the pipeline projects and Wayne National Forest drilling permits are still in the process of being finalized, but the Center isn't wasting time in this fight against the federal government.

In more scientific circles, the Indiana bat is known as Myotis sodalis, which translates roughly as "mouse-eared companion." They're a social and friendly species. Because of that, they travel in packs (up to 500 flapping bats per square foot). And because of that, they're incredibly vulnerable to human disturbances, like truck traffic and natural gas drilling. Among other places in the region, the Indiana bat lives on land in the Wayne National Forest. Barring a certain outcome of the Center's lawsuit, a drilling boom is imminent.

“The Indiana bat is already over-stressed by white-nose syndrome and climate change. Summer bat detection rates in Ohio have declined by more than 50 percent since 2011,” Wendy Park, an attorney with the Center for Biological Diversity, said in a public statement. “But instead of protecting this fragile species, the [Bureau of Land Management] and Forest Service are allowing the razing and pollution of important bat habitat in the Wayne for harmful fracking.”

The impending lawsuit seeks to address that conflict in court.