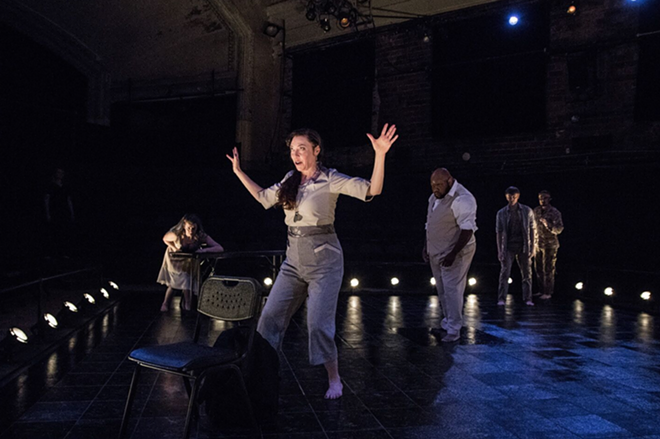 Steve Wagner
We humans have a strange relationship with death, and that’s as it should be. After all, we’re the only animals (as far as we know) who are aware of our own mortality. That does tend to focus the mind.

The minds at Cleveland Public Theatre have been focused on this topic fairly frequently over the years, presenting “devised theater” (collaborative works by a group of people, usually including the performers). In the latest version, Red Ash Mosaic, director/performer Raymond Bobgan and his team attempt to explore the mysteries of death, following the manner of the Egyptian Book of the Dead, in unexpected and innovative forms.

It is difficult to hold such presentations up against the usual measuring stick of most plays, since plot is minimal and character development virtually nonexistent. Instead, it must be judged based on how well it achieves what it seeks, which is to confront the audience with, as Bobgan states in his program notes, “issues of identity, the divine, and what it means to live.”

Oh, is that all? Yes, the goals for this material are grandiose, but if you believe that theater should set its sights high, this can be intoxicating stuff. Of course, as with most intoxicants, not all the results are splendid and sometimes you wind up barfing on your shoes. But that’s to be expected.

In this piece, a few cast members, along with the stage manager who makes occasional appearances, gather on a black tiled square ringed with floor lights. They appear to be in a video game arcade or store—two guys are playing a blow-‘em-up game, a woman is searching for a gift, and the clerk is helping them out.

But when a thunderstorm hits, some others duck inside for cover, including a Muslim woman wearing a black hijab and long black dress. She is also carrying a backpack, which she eventually leaves in the store, leading the others to question whether it’s a bomb or just an innocent bag left carelessly behind.

That backpack becomes a centerpiece for the ensuing scenes, as the eight performers begin to riff on how they might be facing eternity in the next few seconds, or maybe not. In any case, death is “right over your shoulder” and they launch into various types of reflections, sometimes speaking and sometimes singing or chanting, to convey their thoughts on The Big Sleep. Some of these thoughts are rather banal (“The river is deep and wide and it flows so fast.”), while others are more intriguing, referring to “an explosion in the mind’s eye.”

What remains intriguing throughout is how director Bobgan choreographs his players as thoughts bubble up under their skin. The performers often writhe and move individually, then break into group movement, sometimes responding to the dreaded backpack like iron filings being moved around by a powerful magnet. In the past, Bobgan has used these mass movements frequently, but in this show they are even more precise and controlled.

There are also moments of surpassing beauty. One occurs when a performer sprinkles the stage with snow from a basket perched on the end of a long pole and another is imagined dead, with dark ashes covering his body.

There is also a lovely interlude in the second act when a woman flies around the stage in a harness, a la Peter Pan or a human tetherball. It is charming, but it goes on for far too long, which is noticeable since another performer is speaking words the whole time. But it’s hard to concentrate on those complex phrases when there’s a woman flying around above your head. Indeed, after a while it seems like the person talking during the extended aerial act was one of Charlie Brown’s teachers intoning “Waa, waa, waa.”

The performers are fully committed to this material, and they do their jobs well. In addition to Bobgan, they are Faye Hargate, Adam Seeholzer, Dionne Atchison, Sarah Moore, Holly Holsinger, and Darius Stubbs. The frequently-observed stage manager is Colleen McGaughey.

While some thoughts eventually land with power, they are often overwhelmed with jejune poetry involving bridges, mirrors, and windows. And then there are the questions (“Do stories have souls?”) that are sometimes more puzzling than interesting.

Still, Bobgan and his troupe are exploring huge ideas with fierce theatrical imagination and a rippling physicality, which is a lot more than you can say about most plays.